Wednesday morning started very late for us as the time change had really messed up our body clocks. We woke the kids at 10:30am and sadly missed the hotel breakfast altogether. Finding a suitable breakfast in the shopping mall was no easy task, but we ended up at Starbucks. That kept the wolf from the door, then we got some more breakfast supplies at the supermarket in the shopping centre basement.

It was nearly midday by the time we ventured out and the day was a scorcher. After telling the kids about the heavy rain in the tropics, we are being treated to hot sunny days. 35 degrees with blazing sun and high humidity is definitely warmer than we are used to! We were keen to check out the Petronas Towers and figured out a way to get there to minimise outdoor time. After a monorail ride, sky bridge walk and tunnel, we popped out at the KLCC Park in front of the towers. It is beautifully landscaped with tropical gardens, fountains and a kids pool and massive playground. It also has fantastic views of the towers. The kids loved swimming in the pool in the heat of the day. They were tempted by the massive playground, but didn’t last more than five minutes even in dripping wet clothes! The Petronas Towers are amazing buildings and far more impressive in real life than in pictures. We had planned to go up and walk the sky bridge, but the free tickets have recently been replaced with very pricey tickets. In the end we decided the view of the towers was more impressive than the view from the towers and just admired them from the ground. 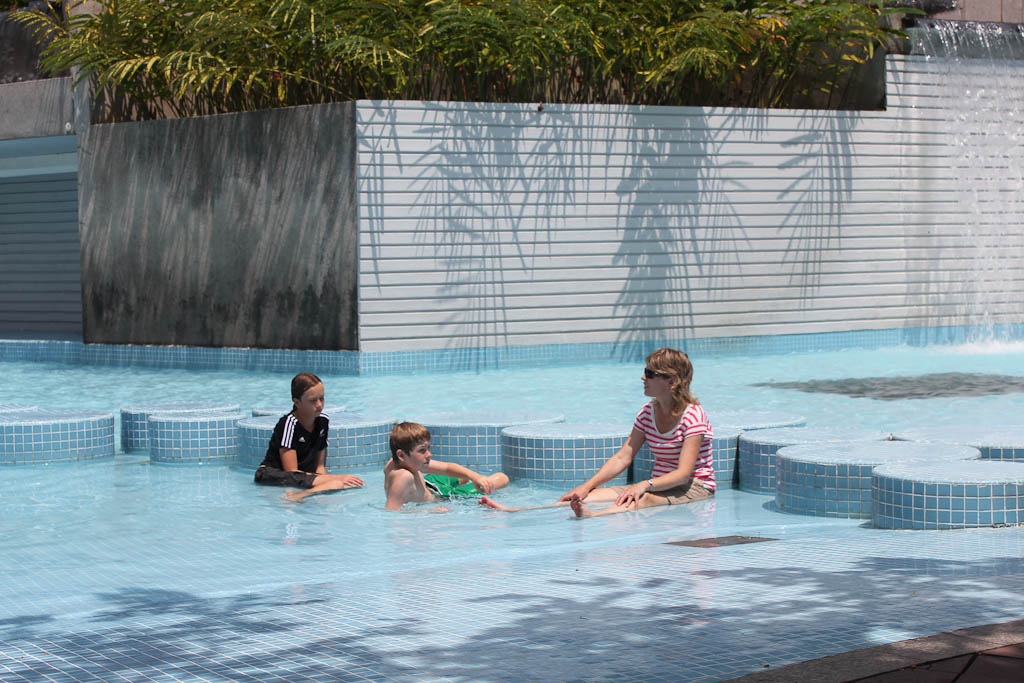 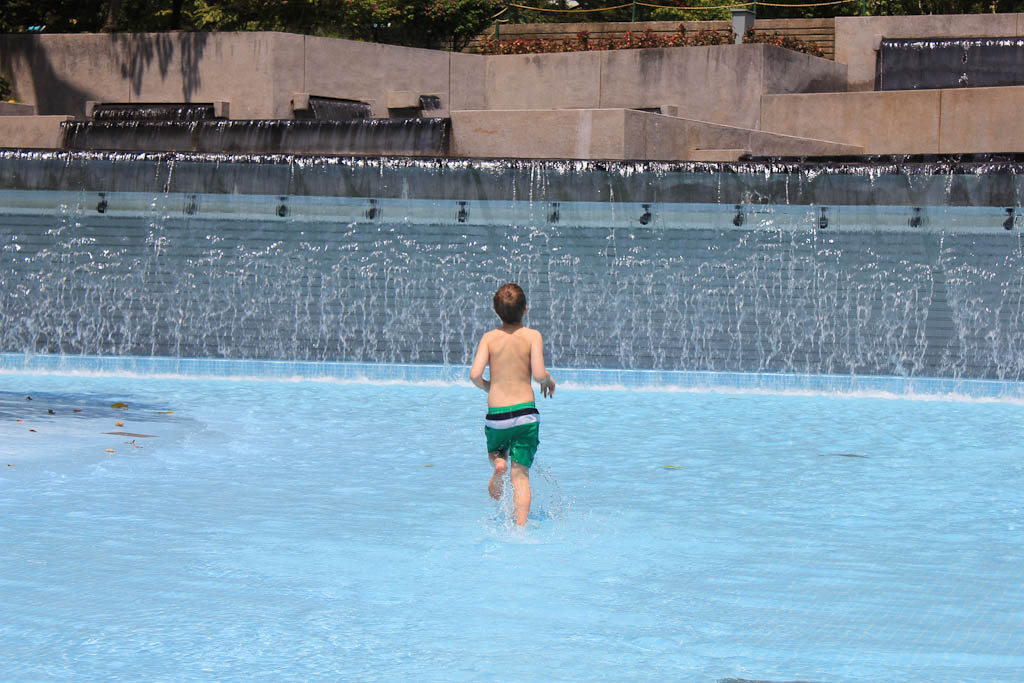 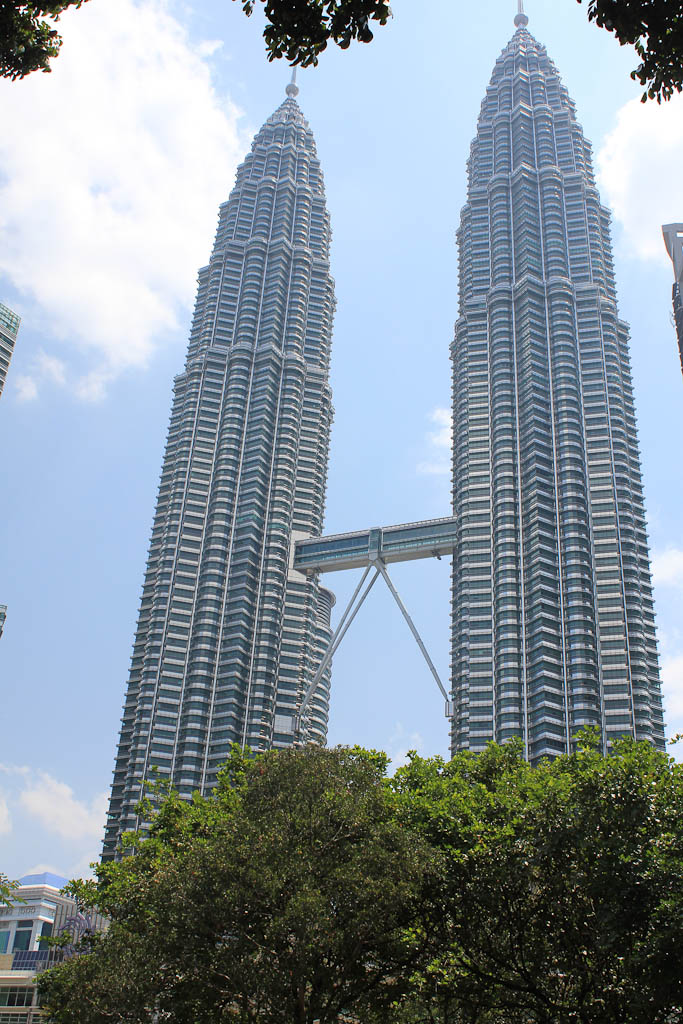 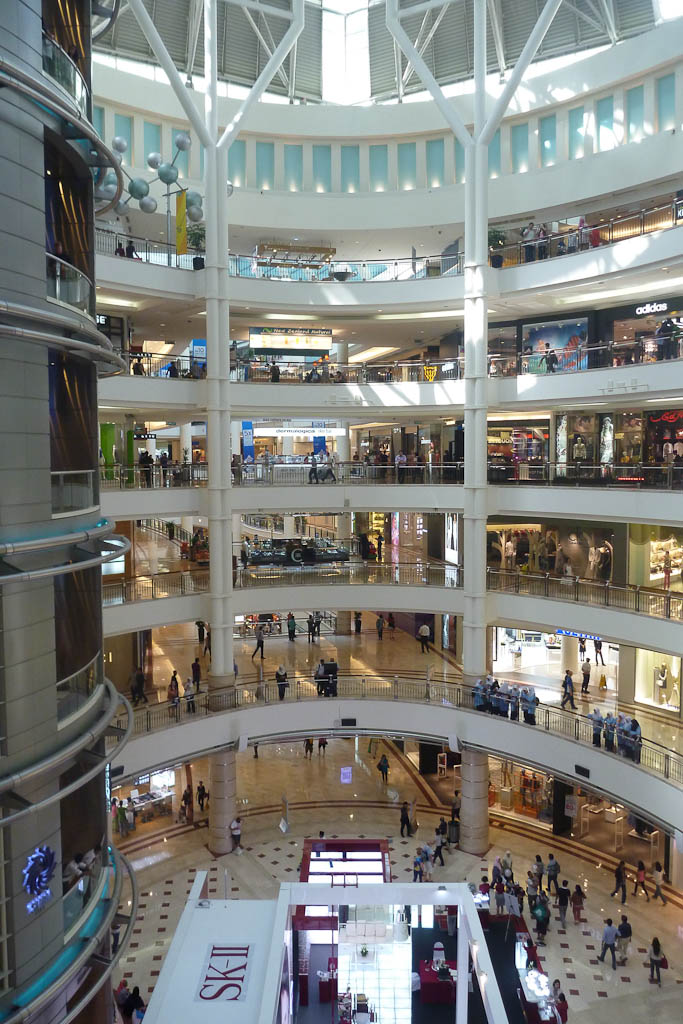 Lunch was at Nandos inside the huge Suria KLCC shopping centre. Anna and I split from the boys after lunch so we could check out some of the shops. Suria KLCC is definitely one of the more upmarket malls in KL, but it also has normal shops. We laughed at all the British stores there and almost felt like we were back in the UK – Harrods, Marks & Spencers, Top Shop etc. We had fun looking but didn’t part with any Ringgits. On the way back we checked out the Pavilion shopping centre, then grabbed a round of ice creams from the supermarket on the way back to the hotel.

There was only one cure for the heat. We headed to the pool with our ice creams. We checked the signs to make sure we were allowed food and couldn’t see anything other than a “no alcohol” sign. Half way through eating our ice creams a very agitated security guard told us “no food”. We figured he couldn’t do much anyway so enjoyed the rest of our treat and he just wandered off. The security guards at the pool are quite amusing. They love telling people off, but no one takes much notice of them. The language barrier doesn’t make their job any easier.

The other place we had hoped to visit was the Batu Caves, but we seriously doubted the kids’ ability to cope with the heat. They thought otherwise though and were determined to prove they could handle the caves trip. So we took them to the Petaling Night Markets in Chinatown so they could prove us wrong. We had dinner at a Chinese restaurant, where the food was cooked on the street. Then we wandered the markets and put our bargaining skills to the test. The only thing we bought was a t-shirt for Matt, but we had lots of fun anyway. We were such a target as we had “tourist” written all over us. It was stinking hot in the markets as they are very narrow and the roof traps the heat, but the kids were superb.

We caught a taxi home as it was getting late, but we struggled to get to sleep. Surprisingly, Anna was the only one who fell asleep at a decent time. The rest of us were still wide awake into the early hours of the morning.

The Kiwi boys go to Bathurst