It’s been about 15 months since I wrote the last blog. Even though we’ve been sitting on a plane for the last 9 hours surrounded by a bunch of Japanese High School kids, I still can’t quite believe we are headed for our next major family adventure. The lead-up to this trip has been particularly busy for all of us, so there hasn’t been much spare time to get excited. With plenty of time to contemplate in the air, the excitement is really starting to kick in. We’re especially excited about visiting somewhere that none of us have been before, and somewhere a bit more out of our comfort zone.

We opted for a day flight going over, which meant an early start this morning. Thanks to Andy’s Gold status with Air NZ, we got to skip lining up with the masses. We did have to share the premium check in with the South African cricket team. They looked so dejected, we actually felt really sorry for them. There’s a small lift that takes you directly from premium check-in to premium emmigration, so once again we bypassed the long lines. The only downside of this was the express route provided nowhere to tip our water bottles. We’d taken full water bottles so we could drink on the way to the airport. So we had a choice – drink the lot or ditch the bottle. Two of us opted to drink. If dehydration really contributes to jet lag, we should be just fine.

So far the flight has been quite pleasant. There’s not a lot to see, but we have enjoyed some stunning views of New Caledonia.

We are surprised that the vast majority of passengers are Japanese. We’re already feeling rather out of place, good practice for the weeks to come! All the announcements are in English and Japanese and you can spot that Air NZ do little things differently on these flights to cater to the Japanese market. The meals have been surprisingly good for airline food. For the first time the kids have enjoyed plane food. Both meals have offered Japanese options which have got the thumbs up from the kids. It’s a good sign for the three weeks ahead. The food ratings got a further boost with a snack of triple chocolate Kapiti icecream.

We’re just one hour out of Tokyo now. The kids have been wonderful on the flight and we have been perfectly content to sit and relax after such a busy term. The school students we are sharing the cabin with have been remarkably well behaved – not sure this many kiwi teenagers would have made such good flying companions! I’ll finish this blog when we get to the hotel.

It’s now 5am Tokyo time. Despite being weirdly quiet here so close to Narita airport, the body clock wouldn’t let us sleep past 4am (apart from Anna of course who sleeps on…). Not too bad considering we went to bed at 8pm though!

The last overseas airport we landed at was San Francisco, and the queues there were horrific. Narita was a dream by comparison, with short immigration lines and 2 minute baggage claim. The process for collecting our rail passes was not so efficient and felt like an administrative marathon. The line wasn’t too bad (maybe 15 minutes) but it took about 45 minutes at the counter. The systems they used seemed incredibly long winded and manual. Some computers were involved, but there was also much form filling, stamping, sticking, stapling and clipping at quite a frantic pace. You get the impression all these systems were quite high-tech in the boom times of the 70s and 80s, but it felt like a technology time-warp compared to what we are used to. I had made 3 rail reservations online so those had to be processed as well. Two of them were on the new Shinkansen (bullet train) line which only opened 12 days ago. That really threw a spanner in the works as the books and maps that had to be referred to did not include this route.

We eventually emerged from the rail centre with 4 rail passes and 12 seat reservations, so all ended well. The bus to the airport hotel was much simpler. We are staying at the Toyoko Inn. 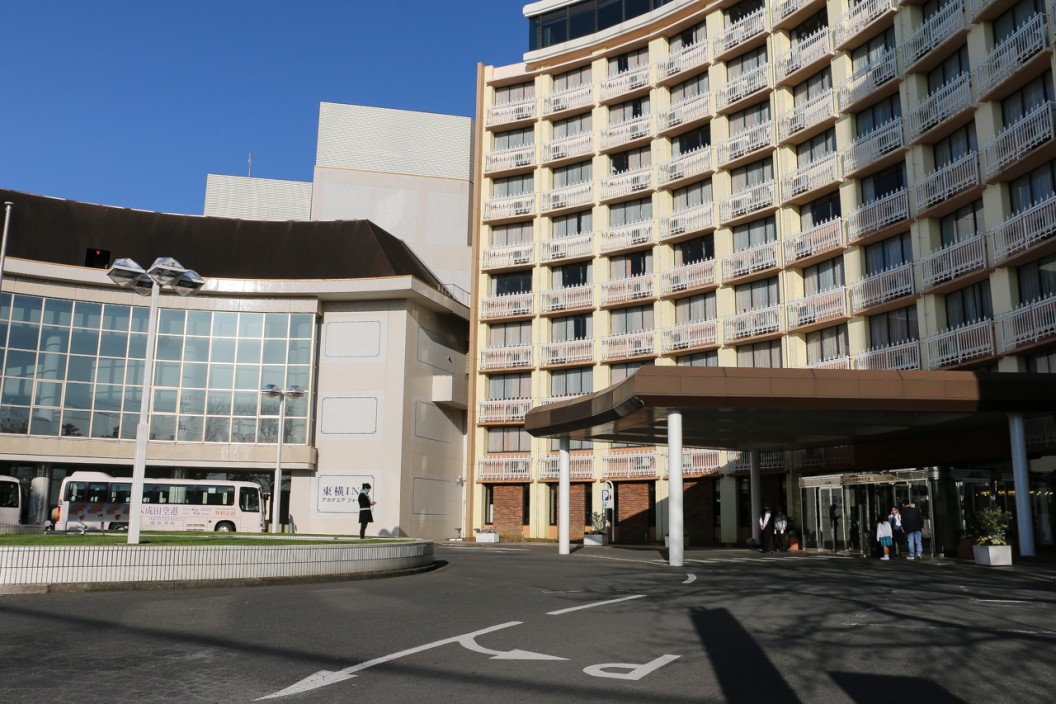 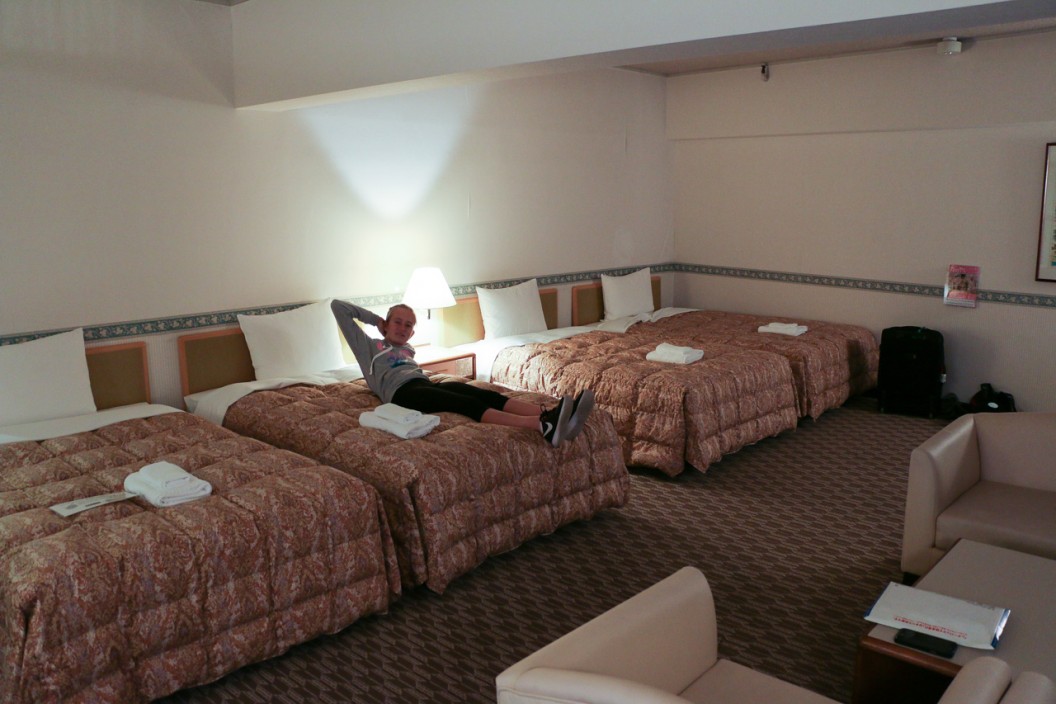 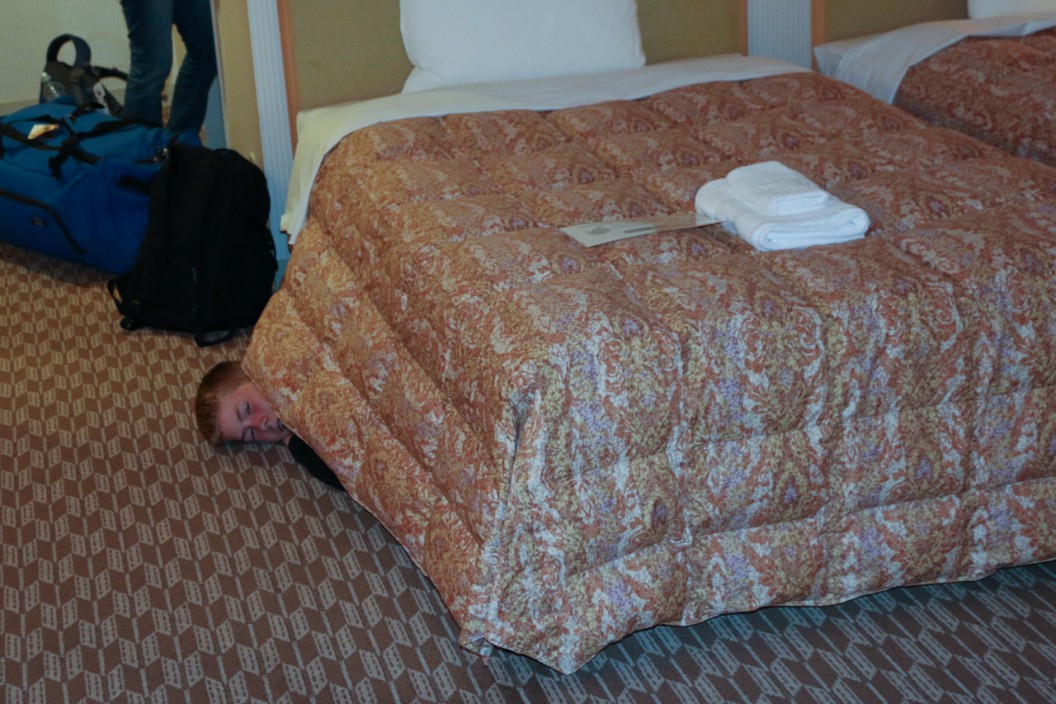 Nothing hiding under here…

It ticked all the boxes of a huge room with a double bed each, cheap and cheerful dinners and a free breakfast – all for a really decent price. The lobby was overrun with loud Chinese tourists packaging up all their holiday shopping – every one of them had at least one rice cooker and dehumidifier. By the time we went back down for dinner/supper they had disappeared and the place felt a lot calmer. We finished our day with a couple of small pizzas to share and a drink each from the vending machine for the grand total of 1,400 yen (less than $16).

A short walk to the 7 Eleven