The Zugspitze weather forecast wasn’t great for Wednesday either, but we woke to a clear summit. There was no mucking around and we were on the first gondola at 8:40am. In fact we were the only non-workers on the gondola! The Zugspitze gondola is king-sized, holding up to 100 people. It whizzes passengers from around 1200m to 2964m in just seven minutes.

We knew the weather had been cooler over the last couple of days, but never expected the quantity of snow that greeted us at the summit. It was a complete winter wonderland, with snow and ice everywhere. It was also extremely cold – below freezing with an even colder wind chill. There was not another tourist in sight for at least twenty minutes. 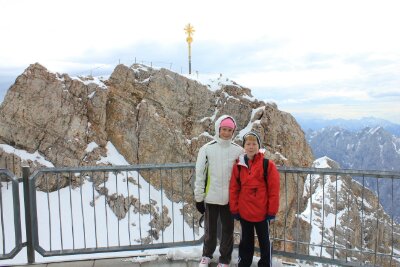 The Zugspitze is on the border between Austria and Germany. The border is just below the summit, with the highest rock belonging to Germany. You can reach the summit via the Austrian side or the German side, and each country has their own facilities at the top. The Austrian facilities are far nicer, but more people come up the German side. We lost count of how many times we alternated between Austria and Germany!

The views from the top were breathtaking. The best view was across the Tyrol mountains to the Swiss Alps, as this was the area with the most snowy peaks. Technically we didn’t actually reach the summit as the thick snow made it too dangerous to climb the final few metres to the top. The kids loved playing with the fresh snow – all other snow up until now had been around for a while.

On the Austrian side, there was a Zugspitze museum. It gave us a chance to warm up and was surprisingly interesting even though we were the only people in it! As we had morning tea in the summit restaurant, the clouds started rolling in. They came and went and it was quite fun to watch them racing past the window.

When we returned to the valley after nearly three hours at the summit, it felt lovely and warm. We returned to our apartment for a leisurely lunch – it was a nice treat not to have lunch on the go. Bichlbach has a little leisure park with a few activities including mini golf. We had a guest card which gave us free entry so I took the kids for a round of golf. It was one of the few things we have seen in Austria that in in need of maintenance, most things are immaculate. The holes were either very easy or extremely difficult, so we had lots of laughs on the tricky ones.

We had the rest of the afternoon free and took votes on what we would do for our Austrian finale. It was unanimous that the best way to finish was another soak in the Alpentherme Ehrenberg hot pools. It was much quieter than the other day with no queue on the slide. We all had fun wearing our legs out on the steps to the top, then soaking the tired legs in the pool.

The holiday changes gear again tomorrow as we’re off to Legoland. It’s quite a mind shift from mountain paradise back to theme park mode! We’ve had nine nights in Austria and have loved it as much as on previous trips. The Austrian people are very relaxed, friendly and kind – maybe it’s because they live in such a beautiful country.

Travels across the USA

And the rain came down…