Monday morning it was time for Part II of our Paris adventure. The bags were
packed again and we caught an RER train out to Marne la Vallee, home of the Parisian Mickey Mouse. The concept of Mickey outside of America seemed strange, but the kids were super excited. They had fond memories of their visit to Disneyland California 6 years ago, but were looking forward to being old enough for all the thrill rides as well.

The Marne la Vallee train station is right at the entrance of the two theme parks (there is also a Walt Disney Studios park here) and trains arrive directly from all over Europe. Apart from the car park at our hotel, we have not even seen a car park for the theme parks – very different from the mammoth car parks at the American Disney parks.

A shuttle bus took us to Hotel Cheyenne, our home for the next three nights. It is a huge sprawling Wild West themed Disney hotel. After checking in and dumping our bags (room not available until 3pm) it was back on the shuttle and into the Disneyland Park. 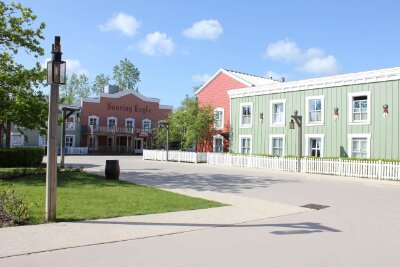 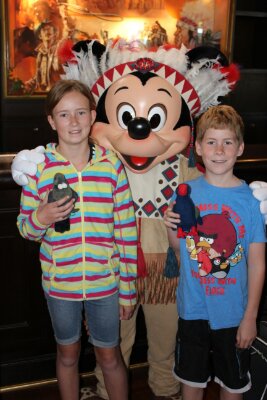 Disneyland Paris opened in April 1992, so is now celebrating its 20th anniversary. In true Disney style, that means everything has been spruced up and decorated, and there are new shows and parades to celebrate the park’s birthday. Not everything in France is as clean as some countries, but the park is immaculate and the gardens and landscaping are stunning. 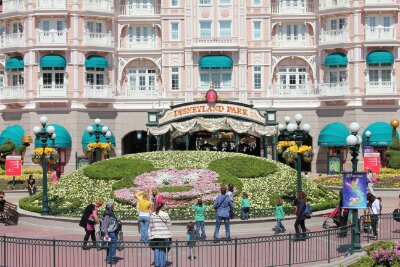 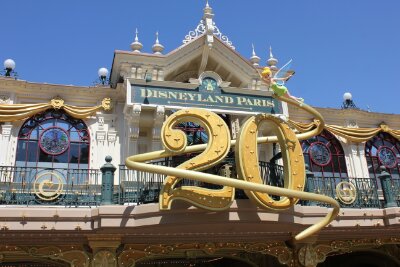 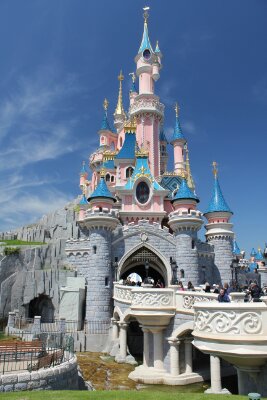 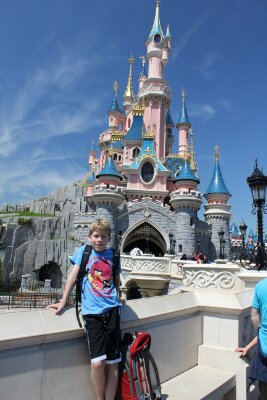 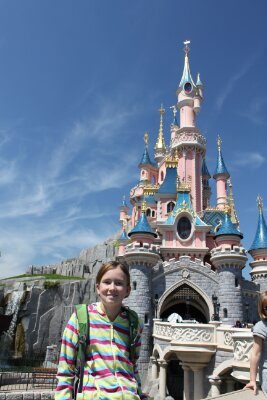 Our first impressions were that the place was packed, mostly with preschoolers – there were strollers everywhere. However, as the day progressed, we realised the park was not actually that busy. A lot of the rides had only a 5 minute queue, especially the thrill rides. We used the Fastpass system (where you book a time and come back later to a priority line) for a couple of the busier rides, but most of the Fastpasses were actually turned off as the queues were so short.

The first big ride of the day was Big Thunder Railroad, which was loved by all. The next biggie was the Indiana Jones ride, a bone shaking roller coaster. Virtually no queue there, so once was not enough. Then we were ready to tackle the big one, Space Mountain. No queue again, but one round was enough. The Space Mountain ride in California has been rebuilt and is very smooth, but the Paris one is very rough. It’s a really fun ride, but the body needs time to recover before doing it again! 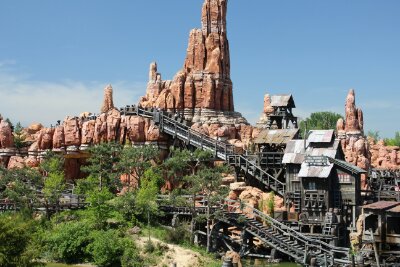 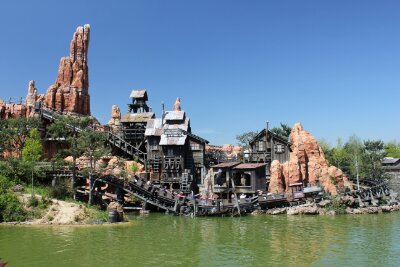 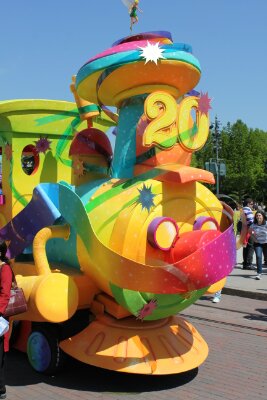 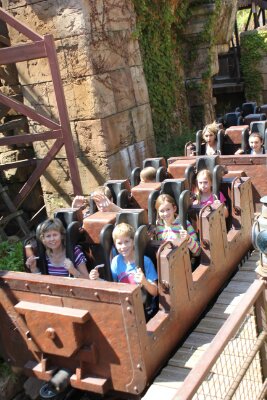 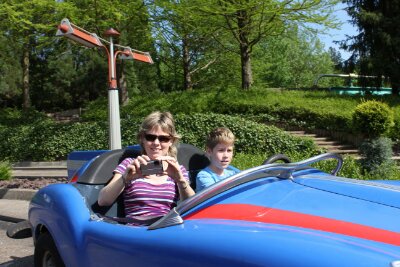 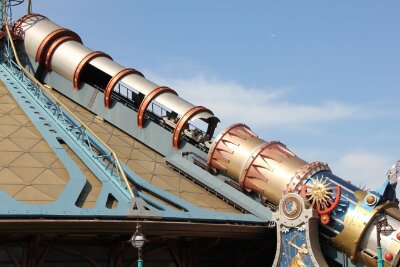 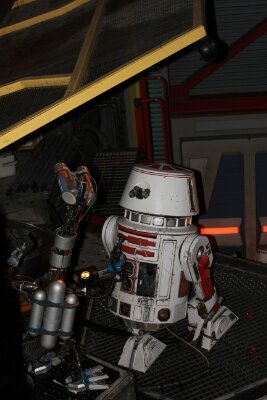 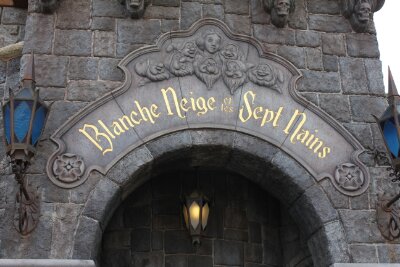 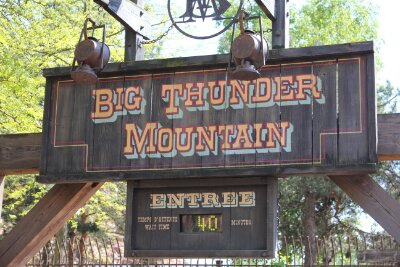 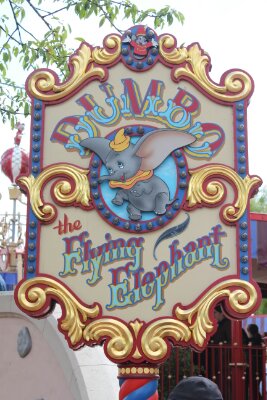 The park is a strange mix of English and French. In some parts everything is in English, then other rides are totally in French. Others are a bizarre mix of Franglais, and sometimes it depends on your timing. The first time we rode the Buzz Lightyear ride, Buzz was giving instructions in English. On the second round Buzz was fluent in French!

We kept riding until late afternoon, then went back to the hotel to claim our bags and find our room. After a power rest for 10 minutes and a quick snack, it was back to claim a spot to watch the 7pm parade. When we left at 5:15pm some people were already reserving their spots for the parade, but we got back just before the parade started and found a decent spot. There were some fantastic floats on the parade – Lion King and Alice in Wonderland were two of my favourites. 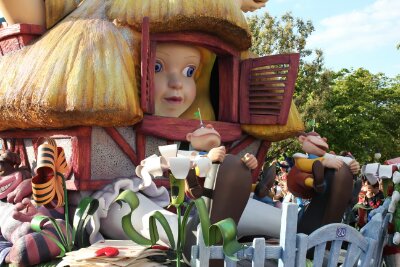 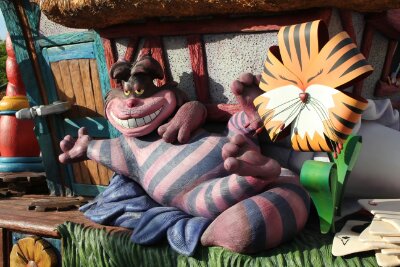 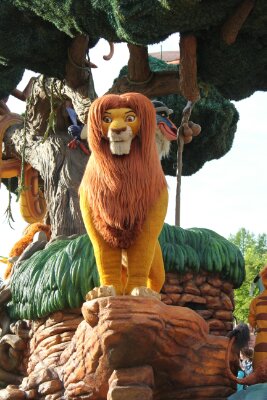 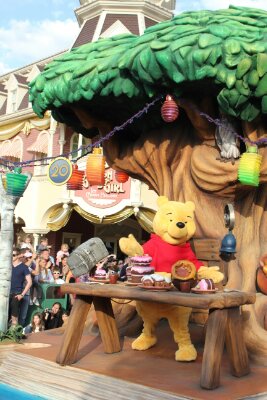 After the parade we tried to find some dinner in the park, but almost all the restaurants were closed. After far too much walking, we gave up and headed to the Disney Village with two very hungry children. King Ludwig’s Castle saved the night – not very French, but filled the gap nicely.

It was a beautiful warm evening and the kids were still hyper, so we decided to do the late show as well. More rides kept us entertained until the show, the highlights being Pirates of the Caribbean and Big Thunder Railroad in the dark. The Disney Dreams show at 10:30pm was amazing – a light, laser, fireworks and fountain show centered on the castle. No one else does shows quite like Disney – the combination of special effects and music is really special and loved by young and old alike. We were all exhausted by the time we got to bed, but it had been a truly magic day. 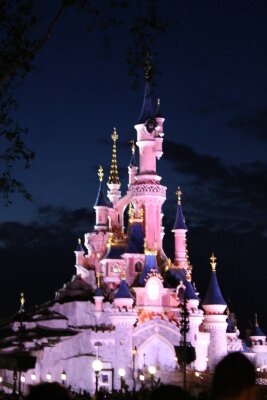 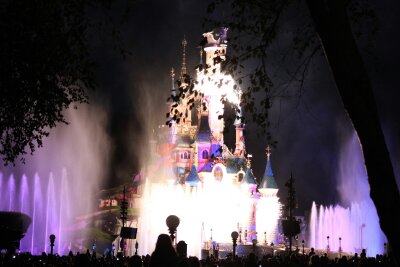 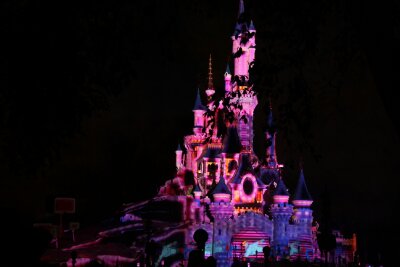 Chaos on the Trains