Friday morning was a major shock to the system. We still struggled to get to sleep last night, so the 5am alarm clock was a rude awakening. We had taken the easy way out and booked a taxi direct from the hotel to the airport. The bonus of the early start was that the roads were empty and we were at the airport by 6:45am, two hours before our flight. 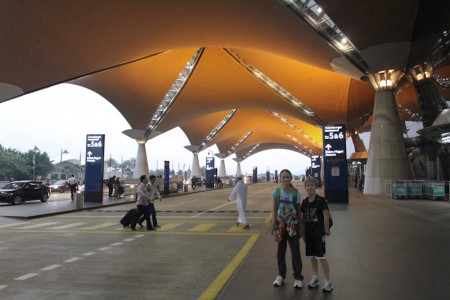 Last time we flew out of KL airport we had 6 hours to fill in. The two hours we had this time absolutely flew by. By the time we had found some breakfast and checked out some of the kids favourite spots from last time, it was time to board the plane. We were delighted when the Captain announced that the flight time would only be nine hours, nearly an hour shorter than scheduled thanks to tail winds of up to 294 km/hr! 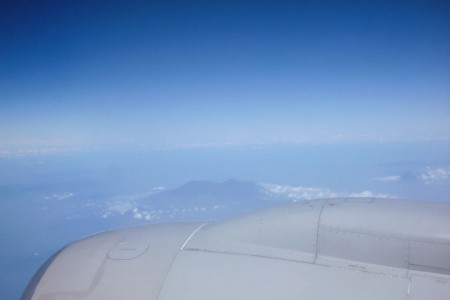 The flight went well with good views all the way. It was a short day as we lost another four hours in time zone changes. We landed at Auckland Airport at 10pm, 45 minutes earlier than scheduled. The kids started laughing when they saw Auckland Airport as it looked so small. They had always thought it was a huge airport. Baggage claim was a bit slow, but eventually our bags turned up. It was a smooth exit from the airport apart from the Beagle sniffer dog hunting me down. He was trained to detect fruit and I’d peeled an orange on the plane and not washed my hands! Good to see he was doing his job well.

We arrived home on the shuttle and were greeted by a very confused cat and a lovely chilly bin full of food on our doorstep (thanks food fairy!). The very confused cat soon became a very cuddly cat and it was like we never went away. The kids were in bed soon after midnight and slept like logs. It was a different story for us – still awake at 4am feeling like we were on some different planet to this one!

It’s Monday now. It has been a weekend of washing (9 loads!), unpacking and trying to drag our brains back to reality. It feels strange to find ourselves back in NZ. In some ways it feels like we just left, in others it feels like we have been away for a very long time. We are amazed when we look back at what we have done in two months.

We had high expectations for this trip. A huge amount of planning went into the trip and the itinerary changed dozens of times before being finalised. So was it as good as we hoped? Actually it was better, way better. We have travelled with the kids before, but having them older made it a completely different experience. They coped with far more than we ever imagined and it was amazing to watch them soak up every new experience. They have a much greater understanding of the big world out there and learnt so much in two months.

The question everyone is asking is “What were the highlights?”. The kids can’t answer that one. As far as they are concerned it was all amazing and they just can’t choose. For the big people, four highlights come to mind. The first was Scotland. The hospitality we received from friends, family and even people we had never met before was incredible. We hope that lots of them can come to NZ so that we can return the hospitality. The second was Lerici in Italy. It was such an authentic Italian experience with beautiful scenery, outstanding food and wine, a beautiful apartment and a hilarious Italian Mama to welcome us. The third was Rothenburg in Germany. This beautiful medieval walled town with stunning accommodation was an unexpected hidden gem. The last highlight was kayaking under the Pont du Gard. Floating underneath such an ancient structure was an amazing experience. Every other place was wonderful as well and only just missed being on our highlights list.

A few days ago I blogged about some of the winners of The Creahan European Adventure (2012) awards. Just for fun at dinner last night, we decided to have a round of “worst” awards. We were surprised how difficult it was to come up with anything worthy. I guess that’s a sign of a fabulous holiday. Here are a few we did manage to dredge up:

Having run out of worst award award ideas, we came up with most embarrassing moments.

Me – when my cousin in Scotland produced an appalling photo of me lying in the sun at their farm 30 years ago (and no I am NOT adding the photo to this blog!)

You have now reached the end of the blog for this trip. Whether you’ve read every blog or just glanced at a few photos, I hope you have enjoyed sharing in our adventures. We certainly enjoyed having them and can now get down to the business of dreaming about where we would like to go next.

Japanese monkeys and the bamboo forest