Our plan was for Hiroshima to be a more relaxing part of the trip, and a chance for our tired bodies to rest a bit. With the promise of a fine day ahead, we headed for Miyajima Island, just south of Hiroshima. We took the local train and then a short ferry ride, all covered by our JR passes. Miyajima is home to the Itsukushima Shrine with its iconic red Torii gate, along with numerous other shrines, temples and memorials. It’s rated as one of the top 3 scenic spots in Japan so we thought it was worth checking out. 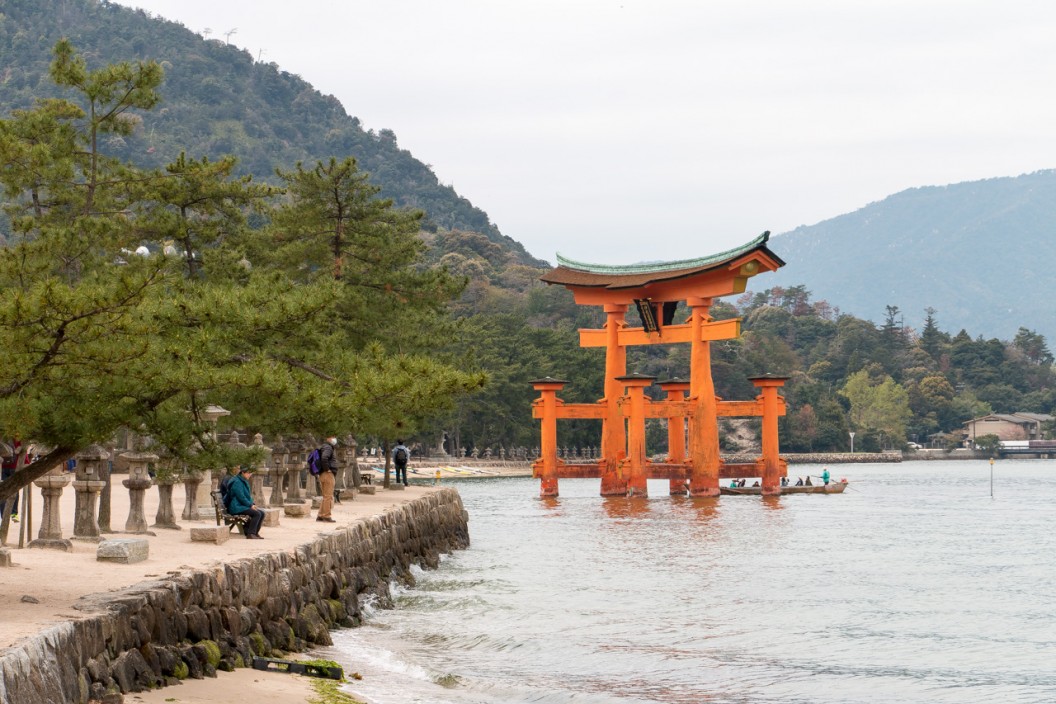 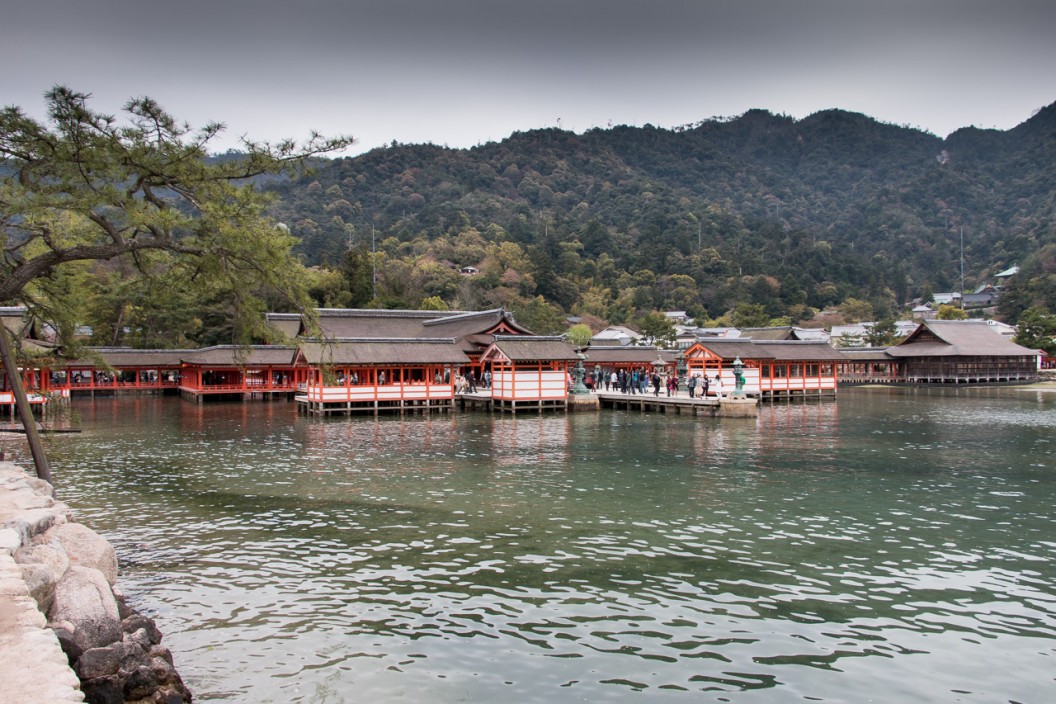 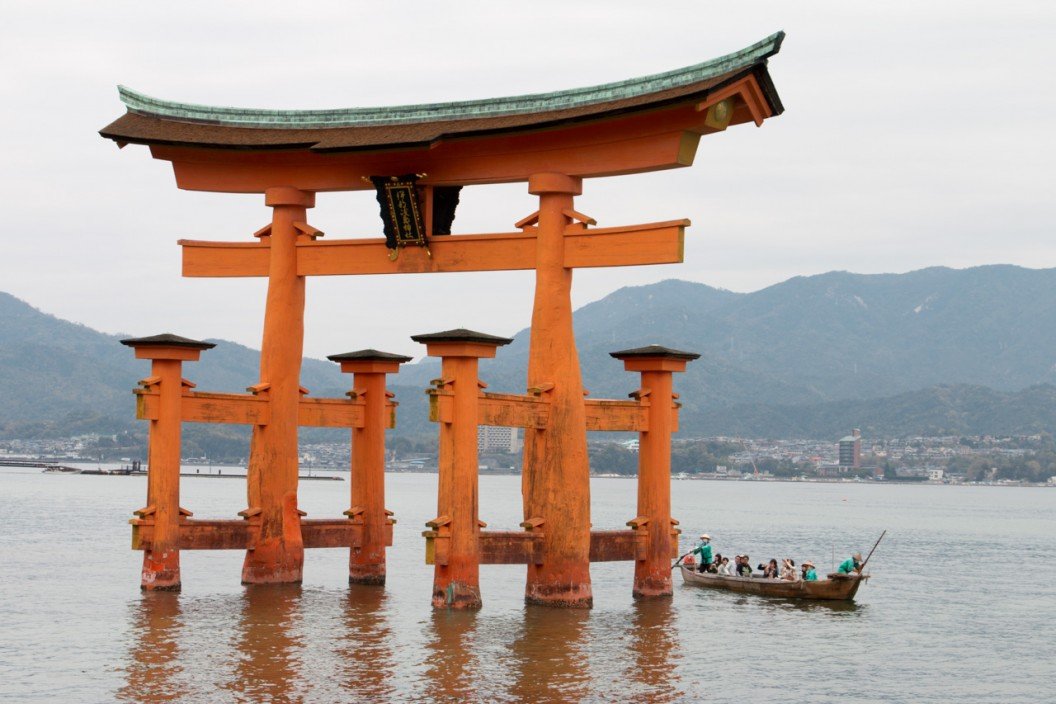 We were greeted to Miyajima by a bunch of deer roaming the streets. Miyajima used to be home to a large colony of monkeys, but they were causing problems and most have been shipped out to a local wildlife park. Monkey sightings are rare these days. The deer provided more than enough entertainment to make up for the lack of monkeys. They seem to eat anything that tourists carry, from lunches to maps. We saw numerous tourists lose their possessions. One Japanese man took great offence to his lunch being stolen and whacked the deer in the face, but he never recovered his lunch!

We walked past the massive Torii gate that appears to float on the sea at high tide and headed up through a beautiful park to the base station of the Mount Misen Ropeway. Mount Misen is the highest point on the island and the ropeway takes you near to the summit. The first stage was in very slow gondolas with incredibly low roofs then we transferred to a much faster and roomier aerial tramway for the second stage. We picnicked at the top of the gondola station with a great view over the Seto Inland Sea then headed off on the half hour walk to the summit. Mount Misen was the highlight of the island for us with great views, lots of huge rock formations and numerous beautiful buildings along the way. 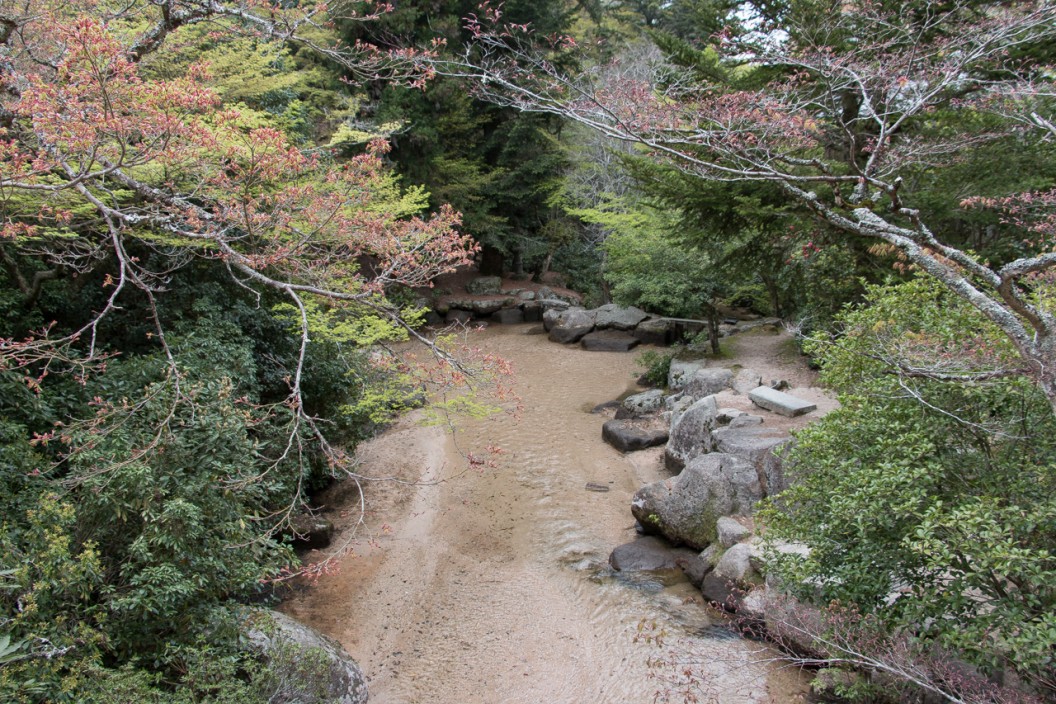 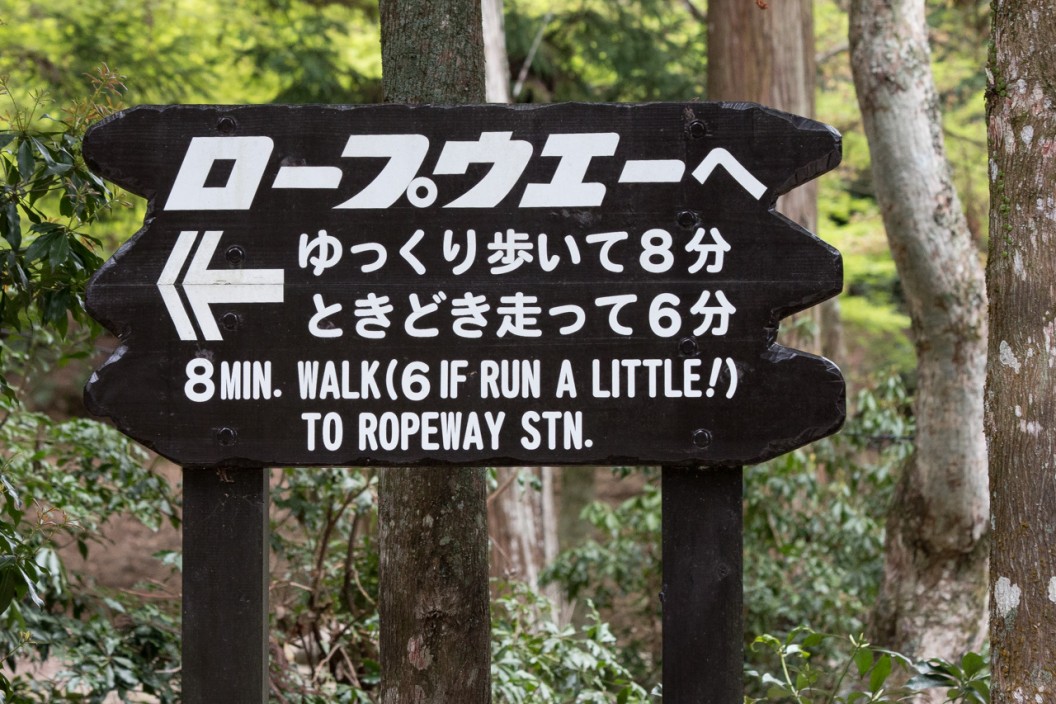 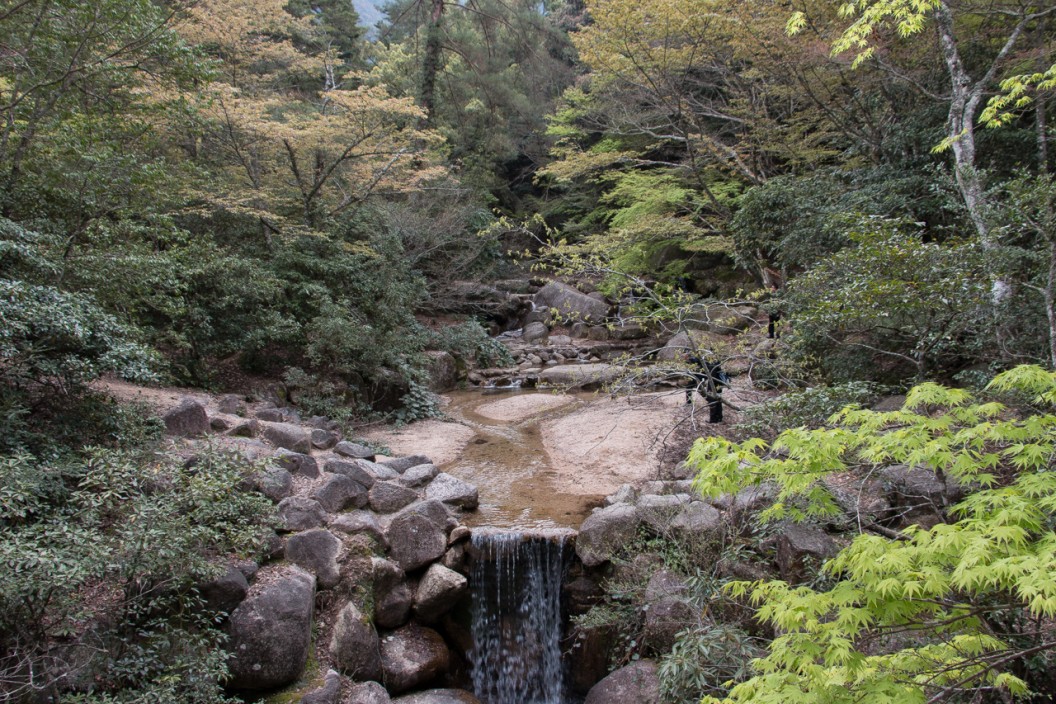 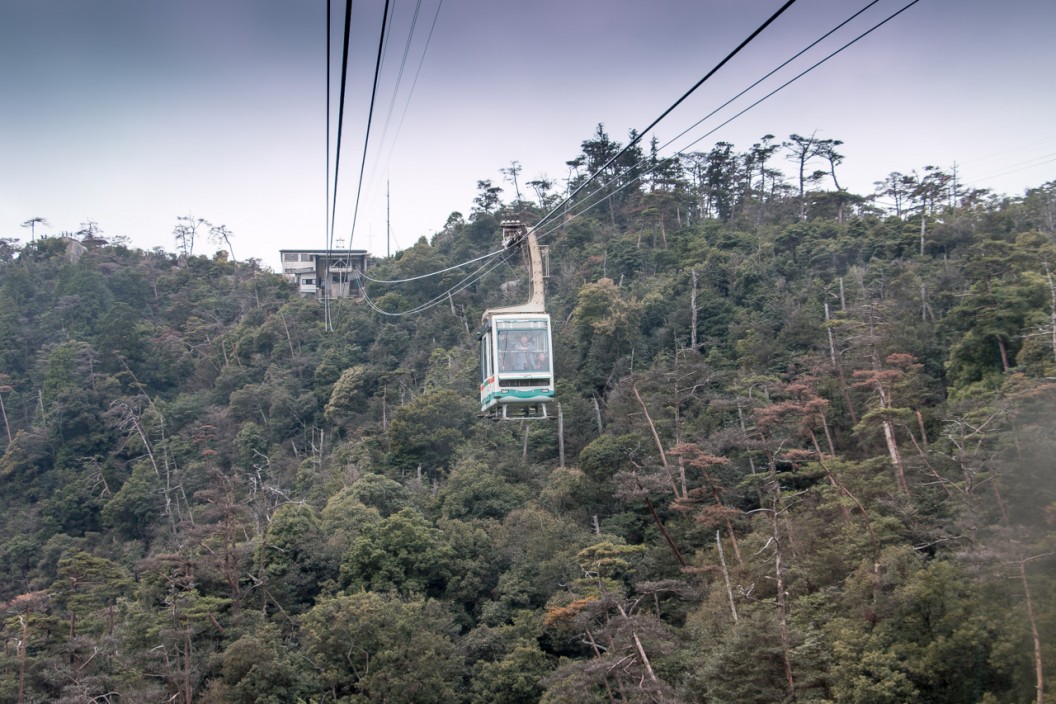 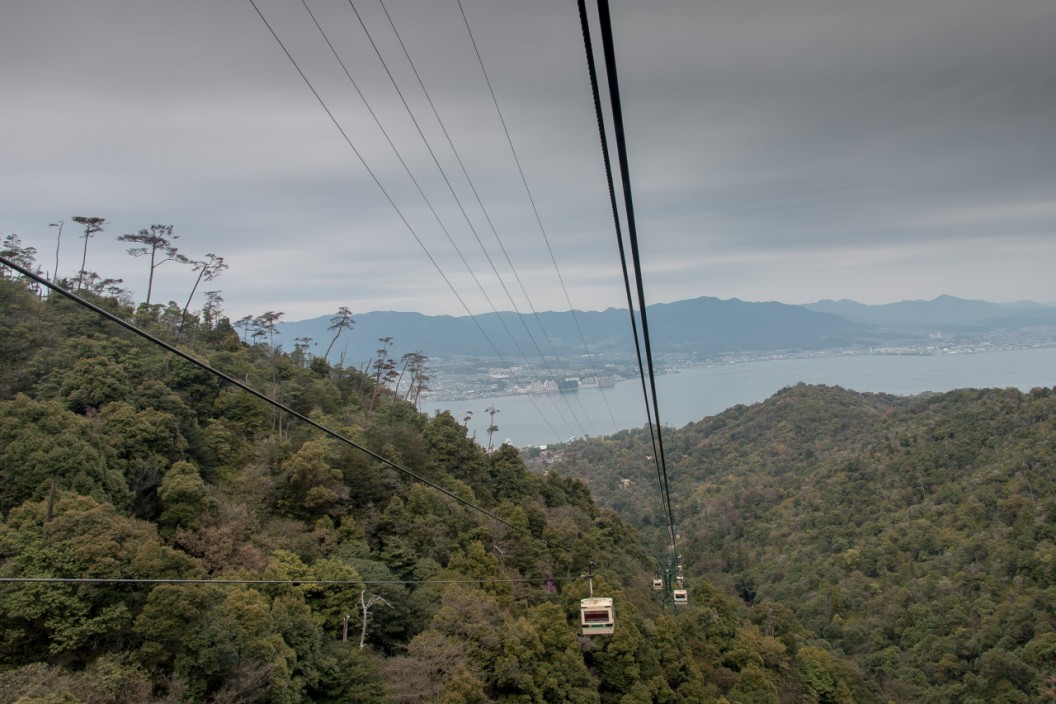 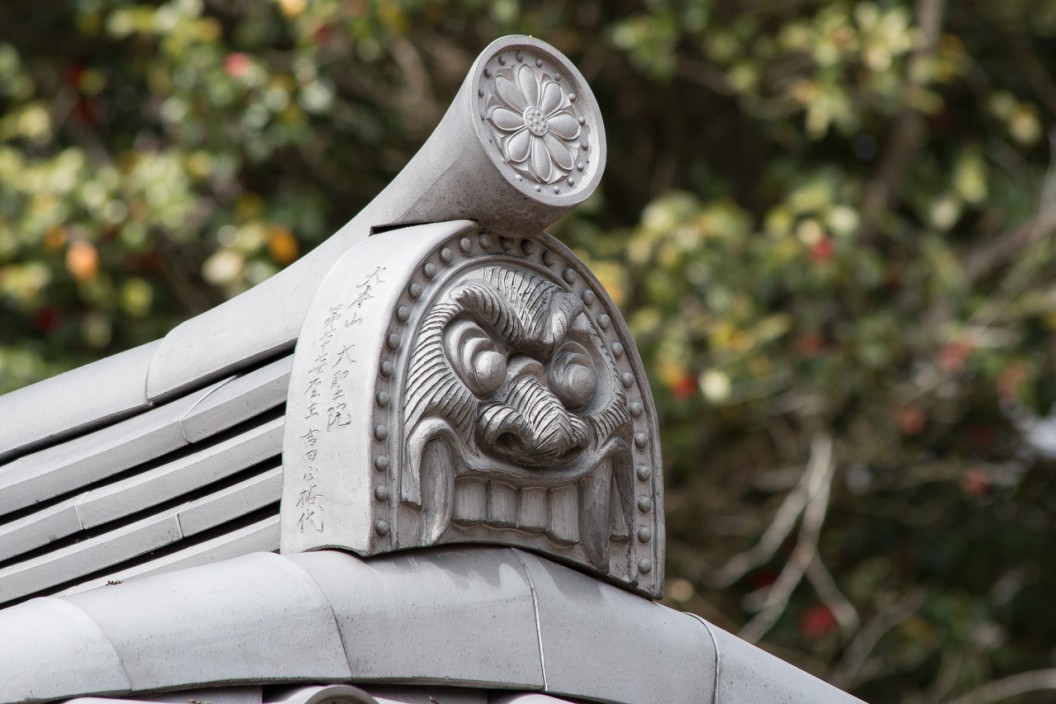 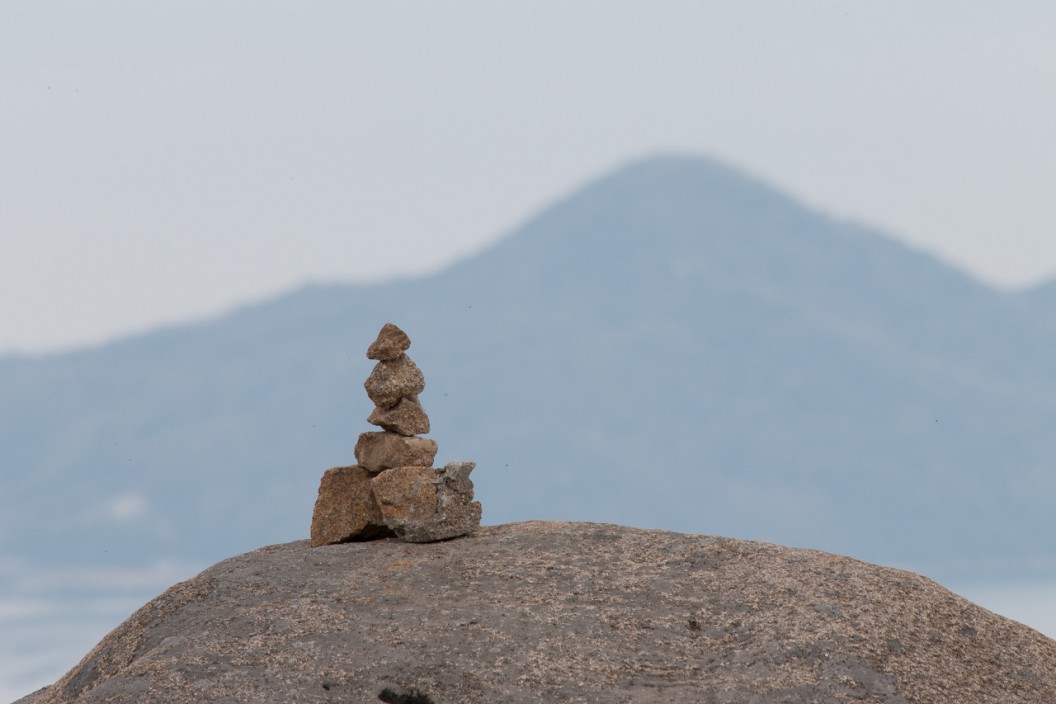 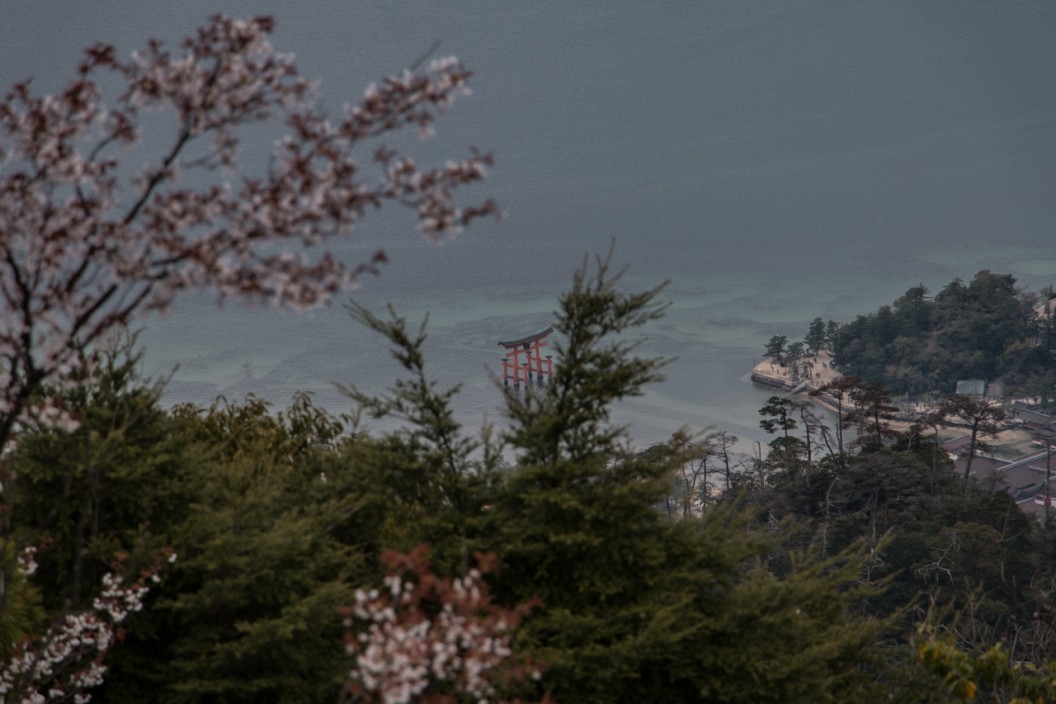 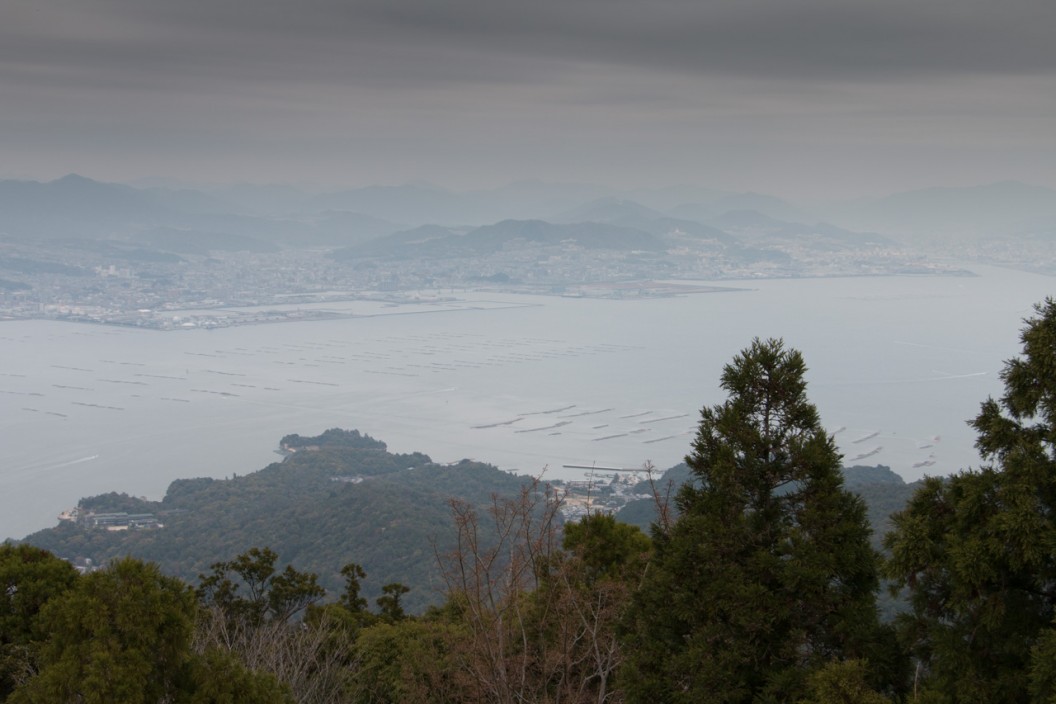 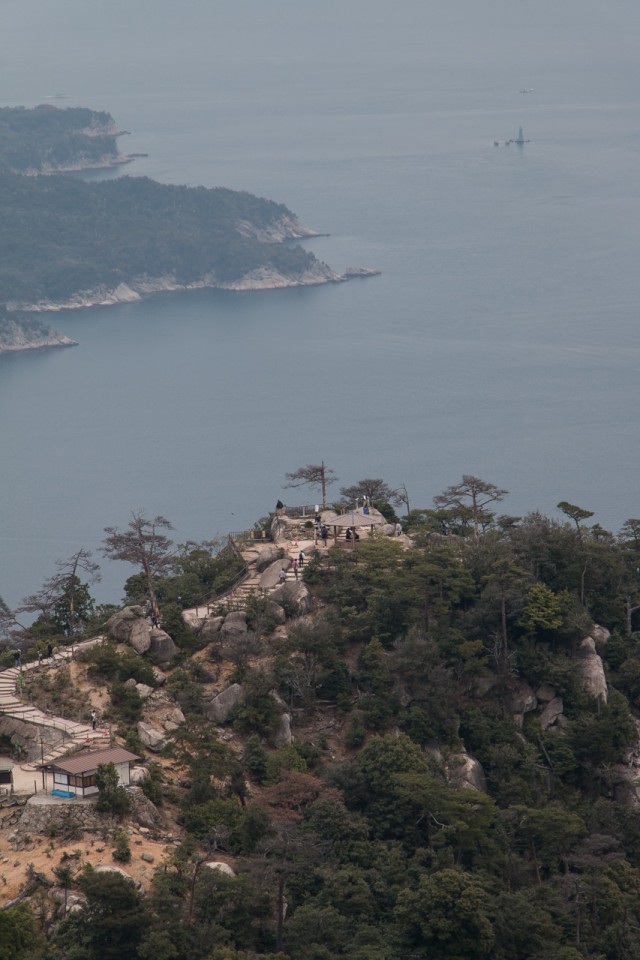 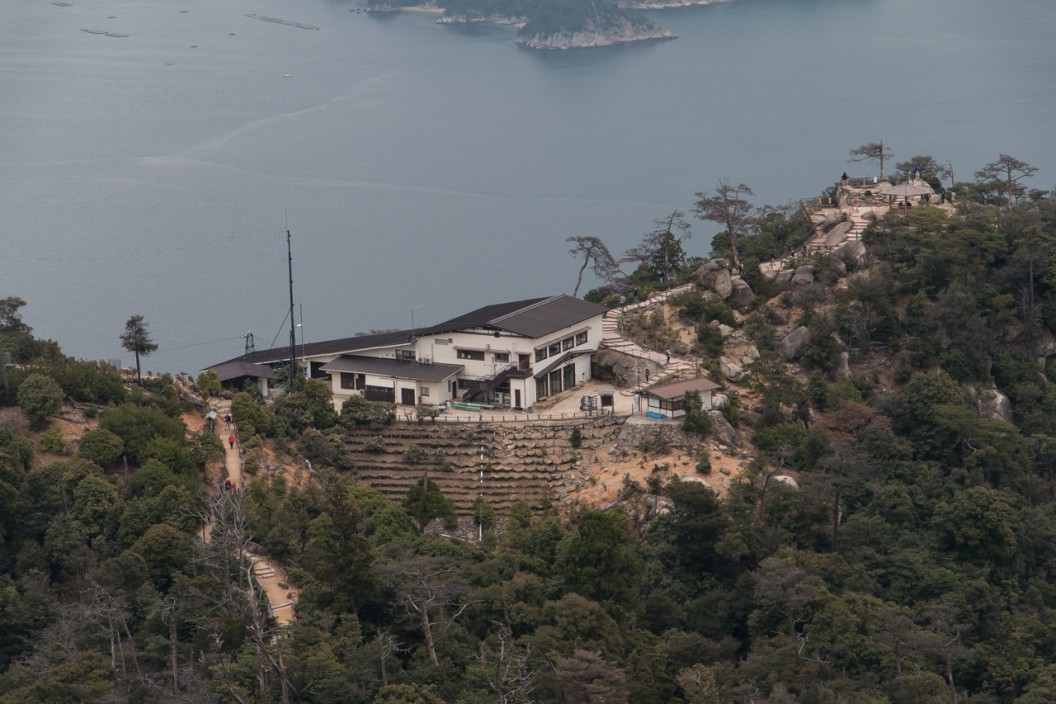 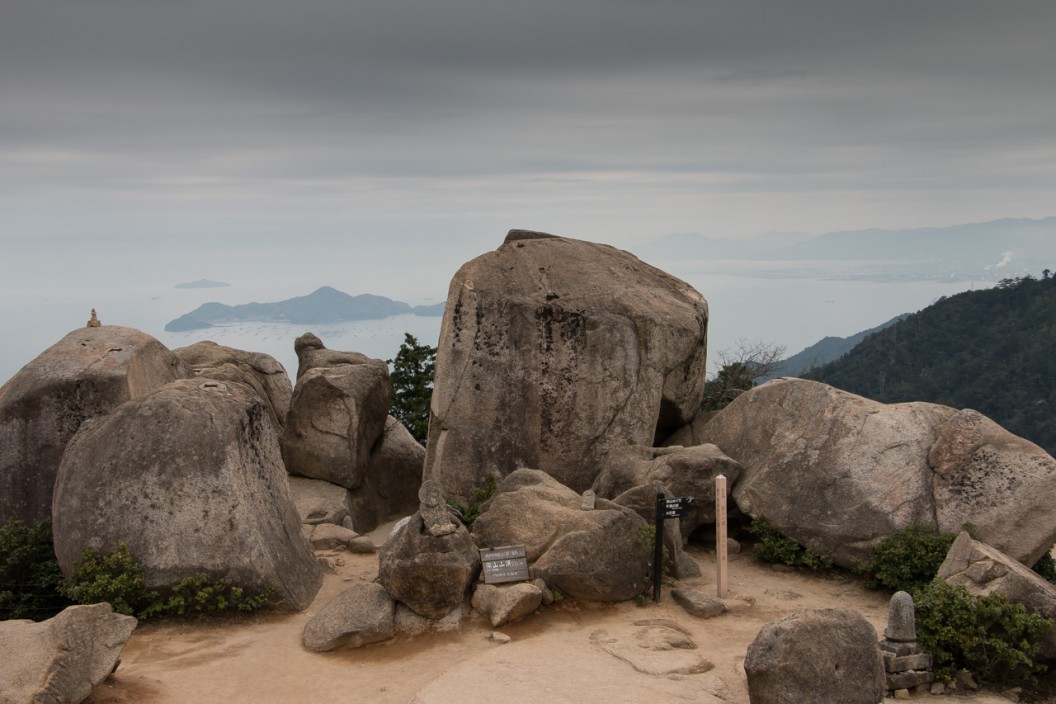 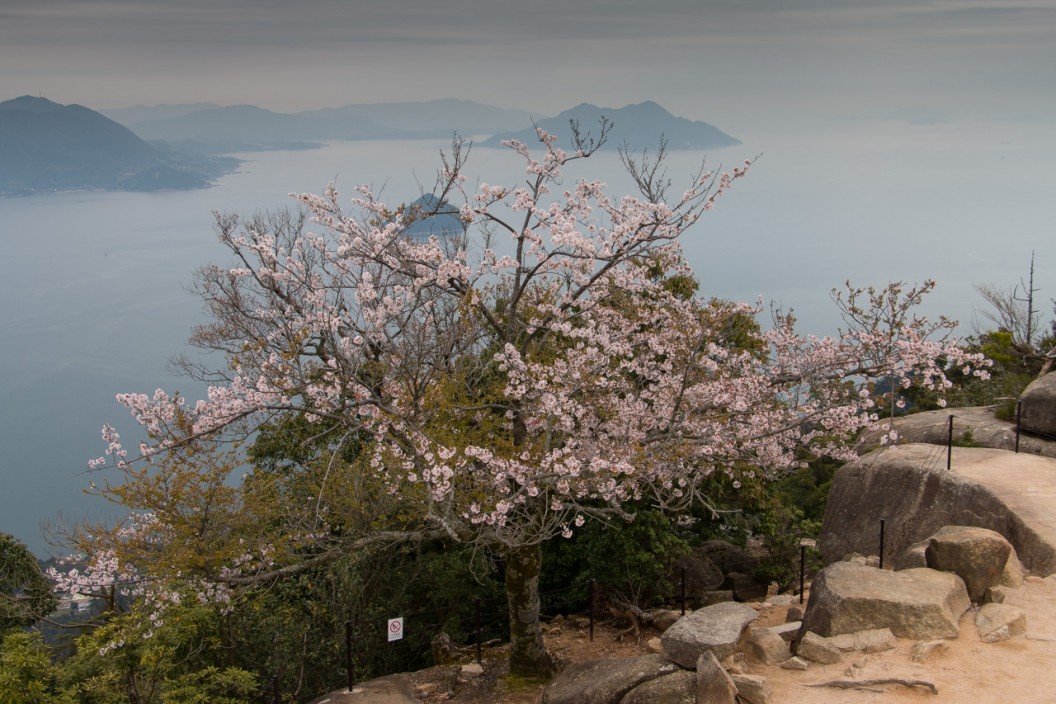 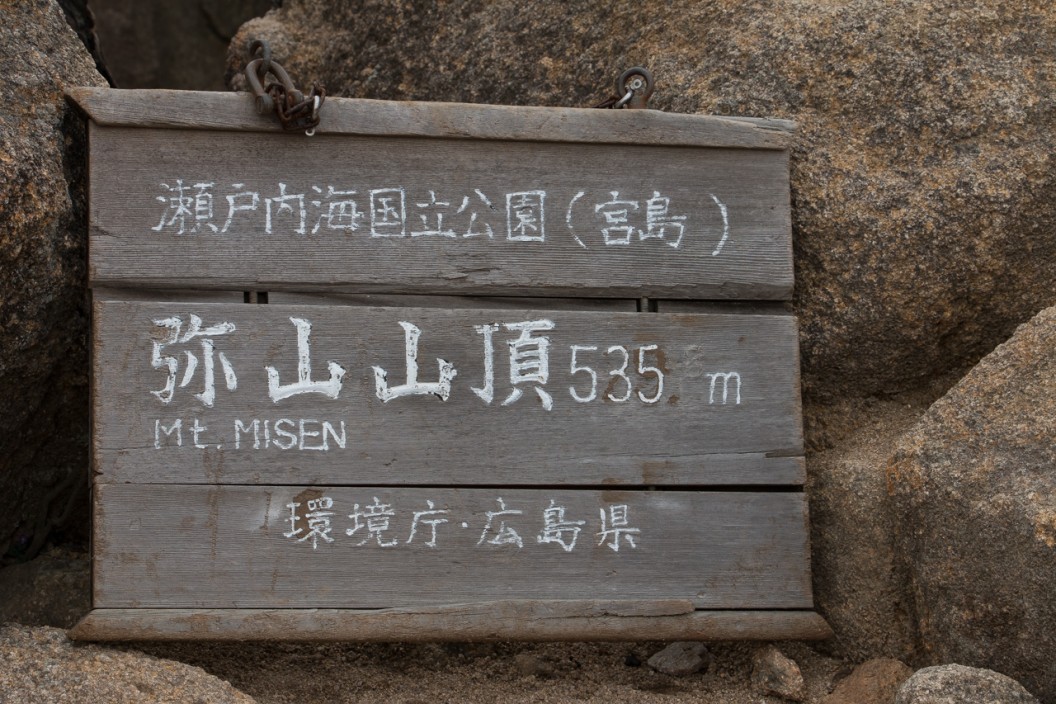 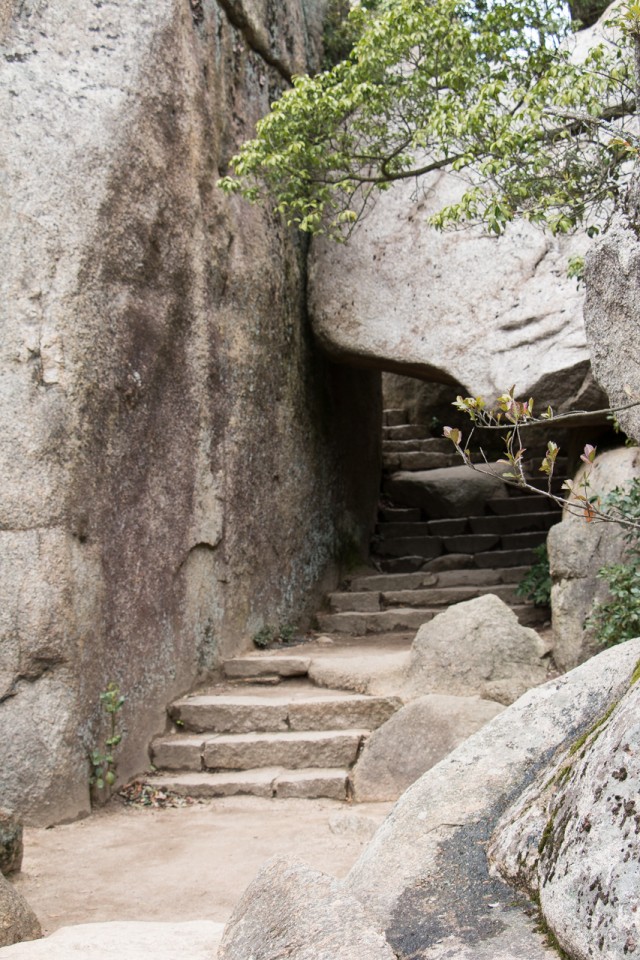 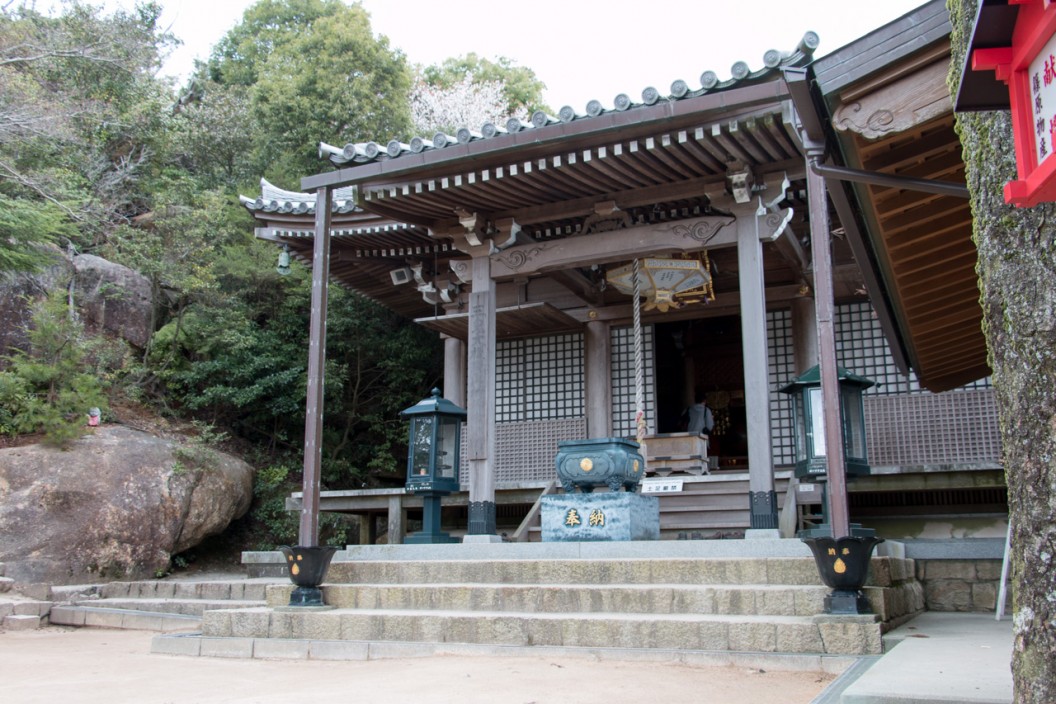 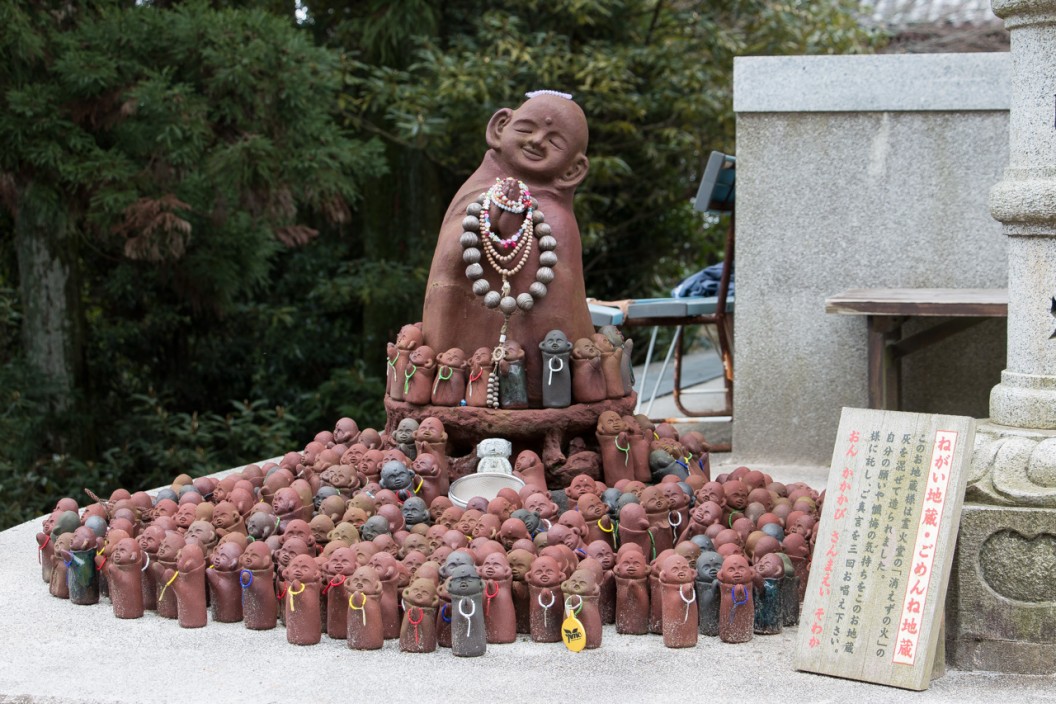 Back down the bottom, the kids spotted a fries stall and couldn’t resist. A nearby deer was partial to fries and followed them for ages trying to get their fries. They were eventually ditched when the deer latched on to somebody else with an ice cream! By the time we got back to the Torii gate, the tide was much lower and we were able to walk right out to it. The kids noticed that people embedded coins into the barnacles near the base of the pillars, and wondered what happened when the tide came back in. Then they looked down and wondered no more – we are used to seeing shells but the ground was littered with coins. We walked back to the ferry via the traditional town and sampled the local delicacy of maple leaf shaped waffles filled with various goodies. It was fun to watch the automated waffle machines churning these out at an impressive rate. 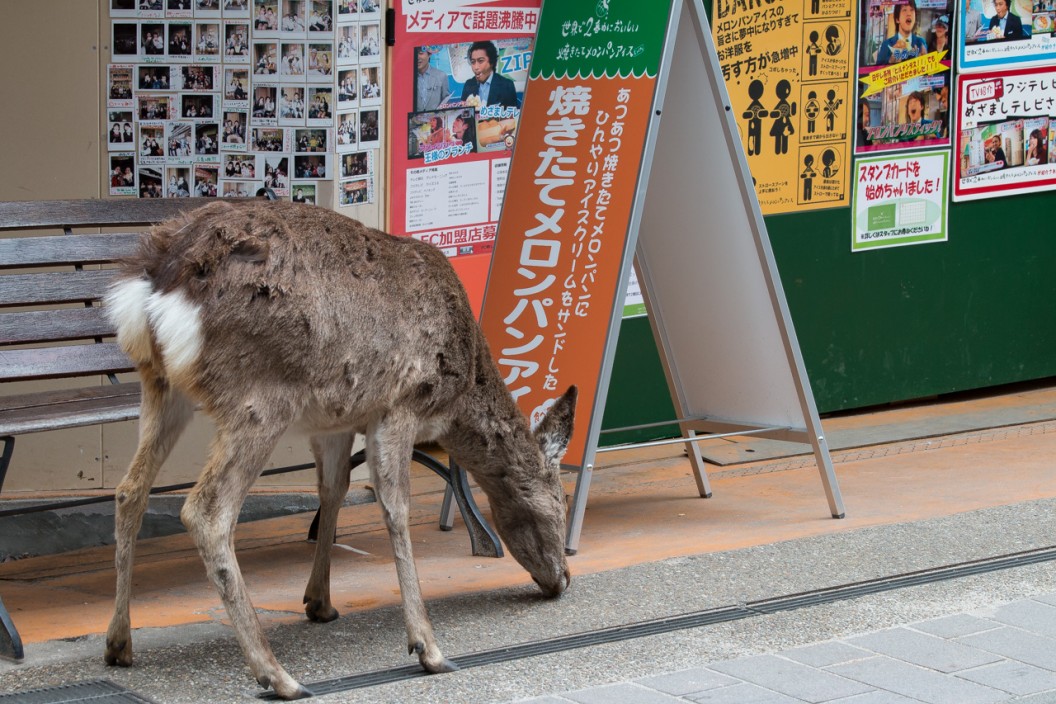 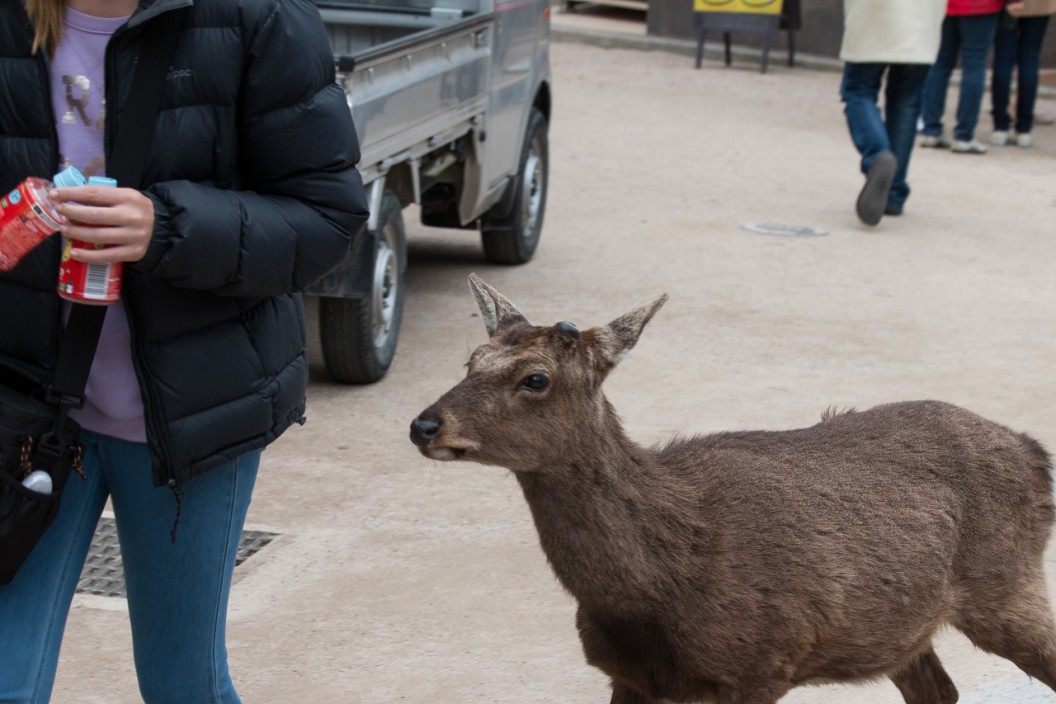 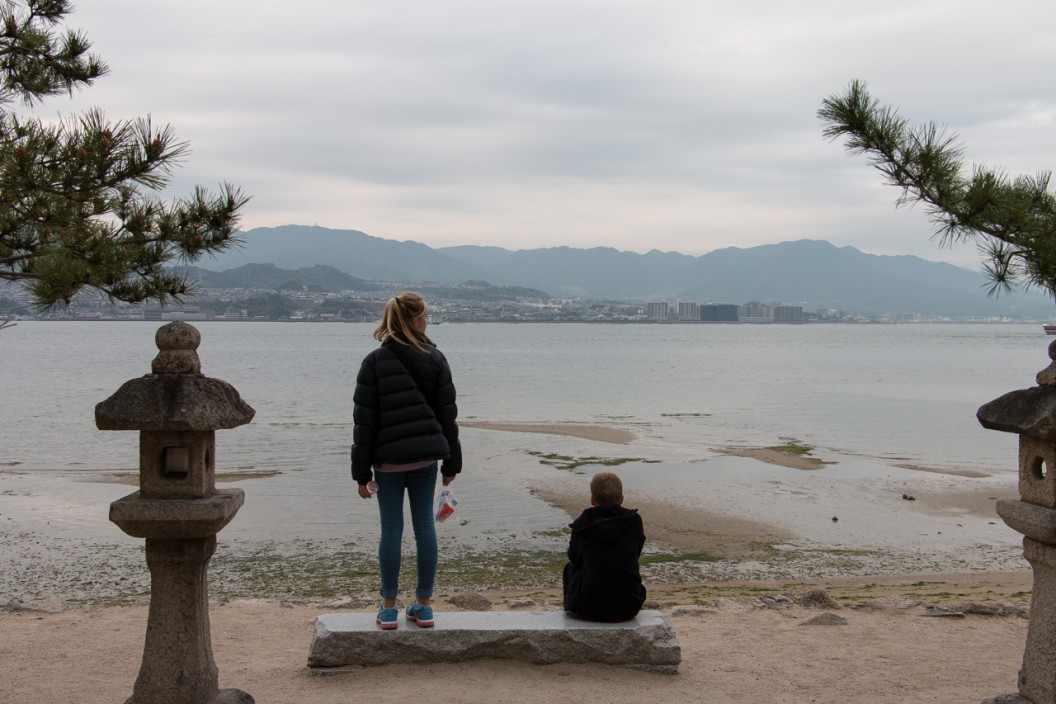 The kids were hopeful that they would get to a baseball game in Japan. The Japanese are mad on baseball and it’s renowned for being a highly entertaining experience. On the train back from Miyajima we consulted Google to see if there was any chance we could see a game while in Hiroshima. Our train was due back in Hiroshima at 5:15pm and a major game was scheduled to start at 6pm. With no game on the next day, we decided to take our chances and try to get tickets. Hiroshima is home to the Mazda Zoom Zoom stadium, the newest baseball stadium in Japan. This stadium is home to the Hiroshima Carp team. We knew it was near to the station (had seen it when we came in on the Shinkansen) so just followed the hoardes of people dressed in Carp gear for about one kilometre. The atmosphere was great with lively stalls selling Carp gear and food all along the route to the stadium.

We tracked down the ticket office and were directed to a lady who spoke enough English to help us select seats. There was a huge variety of ticket types but we settled for seats about 8 rows back from the outfield for about $24 each. Teams seem to play each other for 3 consecutive days and this was the third game between the Hiroshima Carp and Tokyo Giants. The stadium seats 32,000 people and was about 80% full. One stand had about 100 lonely Giants fans (along with their band) and the rest of the place was a sea of enthusiastic Carp supporters. Matt happened to be wearing a red t-shirt so he fitted in well, the rest of us stuck out like a sore thumb.

Hiroshima – visit to Baseball from CreedyNZ on Vimeo. 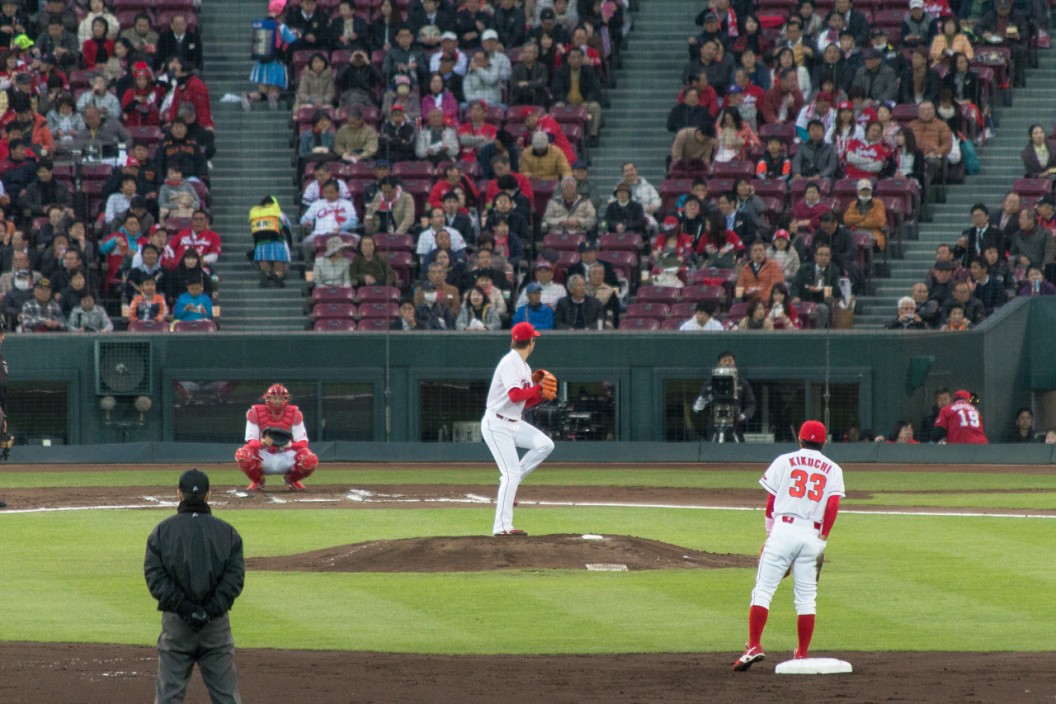 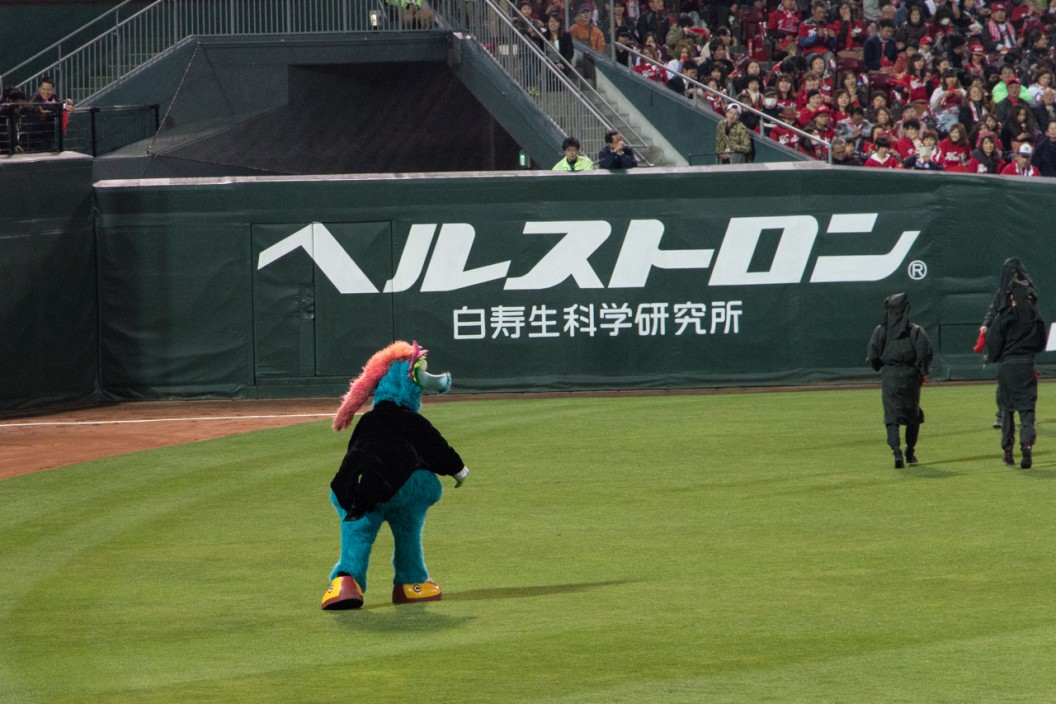 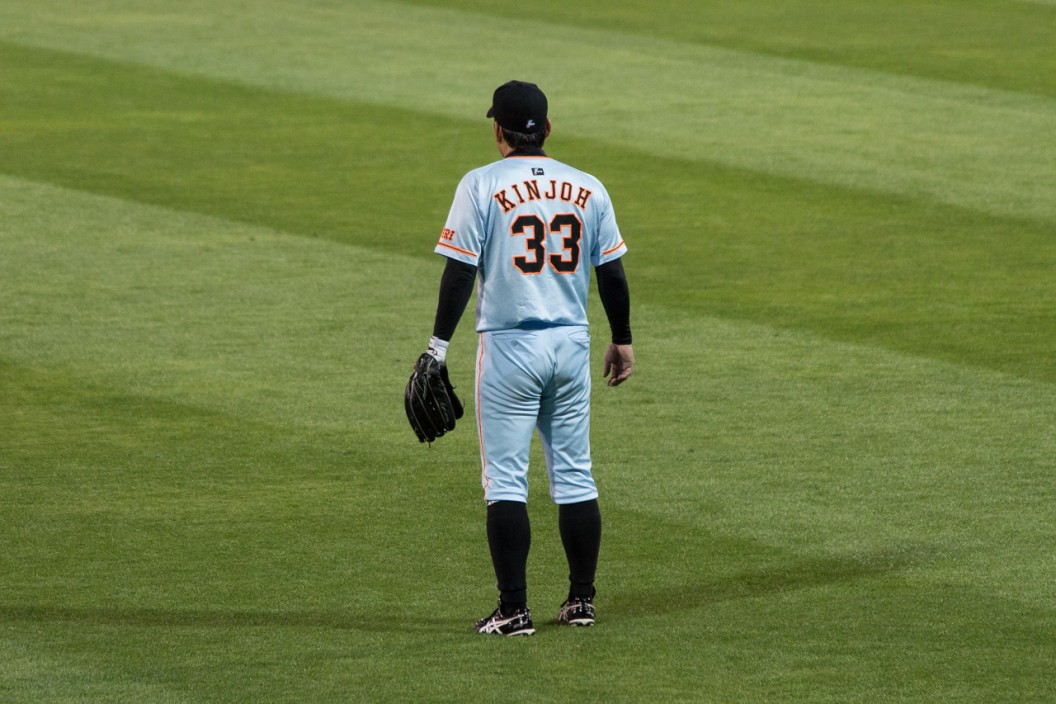 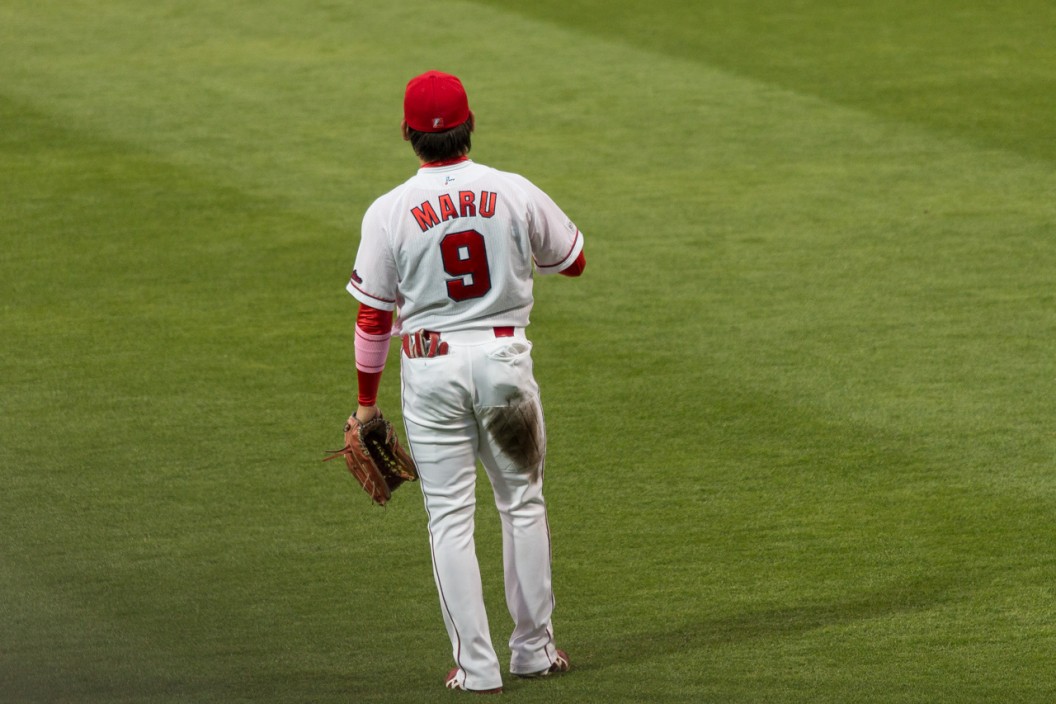 This game will be remembered as a highlight of our trip, it was a huge amount of fun. The baseball was great to watch but it was the crowd that really stole the show. The atmosphere was reasonably subdued when Tokyo was batting (there appeared to some etiquette that singing/bands/other noise was only allowed when your team was batting) but when Hiroshima was batting it was a party atmosphere. It was the most well behaved crowd I have ever seen but they sure knew how to have a good time.

The kids invested in a pair of plastic batons each so they could join in the fun. Each person was given a carp towel on entry and these were used for what the kids called “The Towel Dance”. At another point everyone blew up (sort of) carp shaped balloons. A lovely lady gave us a couple of her spares so we copied everyone else. Everyone held on to them until the end of the sixth Tokyo innings then sang a song while waving the balloons and let them go at the end. We are constantly amazed at the good behaviour of the people here – not one single person let their balloon go at the wrong time!

The game lasted three hours and ended in the best possible way with a win for Hiroshima. It was awesome to be part of such a great celebration. We ended the night with a celebration of our own – a round of ice creams. So much for a rest day, we had walked nearly as many steps as we did on our Disneyland day!