The kids were up bright and early on Friday, keen for another day at Legoland. They had worked out a strategy to maximize rides. Gates opened at 10am. Dad’s job was to take them straight to the very popular Ninjago ride in the hope that the queue would be short. Mum’s job was to rent a Q-Bot for the day to maximize rides. The weather forecast wasn’t great, so we were hoping that would deter the crowds as well.

I was expecting a long queue for the Q-Bot rental, but I had one very quickly. The Q-Bot is a nifty gadget that allows you to reserve a place in a ride queue without actually being there. You wait as long as everyone else, but can do other things while you wait. When your allocated time comes around, the Q-Bot beeps and you get pretty much straight on to the ride.

The crowds were much less than the previous day, so queue times were better anyway. Our strategy was to book a popular ride on the Q-Bot and ride less popular rides while we waited. It worked really well and we got several turns on the most popular rides. The favourites were Ninjago and Project-X. On the Ninjago ride you flew high in the sky, controlling how far you barrel-rolled with your own set of wings. Project-X was a classic wild-mouse roller coaster in a Lego Racers car, with a huge dip near the beginning. 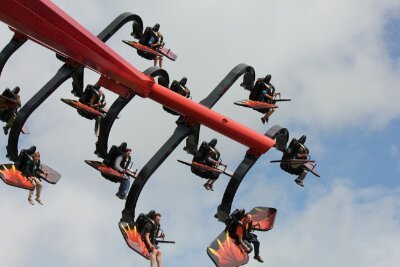 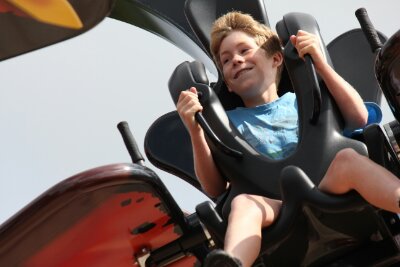 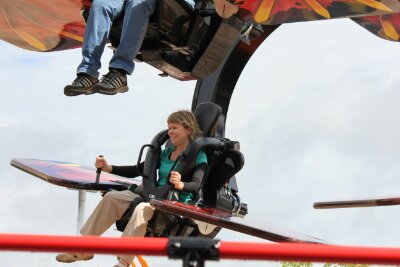 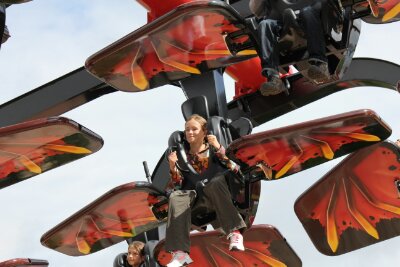 The weather was fine for most of the morning, but rain arrived just before lunch. We escaped into a restaurant for an early bite to eat. The food at Legoland was a huge step up from Disneyland food, with more variety and much more reasonable prices. The kids settled for chicken and chips, while we tucked into huge Bavarian pork knuckles. The Legoland atmosphere was much more relaxing than Disneyland, and didn’t suffer from the same in-your-face commercialism.

It was another Star Wars day and they really made the most of it. There were Star Wars characters everywhere. The boys knew who they all were, the girls recognized Darth Vader and the Storm Troopers but that was about all! There was a marquee set up with amazing Star Wars Lego models inside. The kids favourite Star Wars activity was a huge Lego mosaic that was being built. It was made up of over 3000 small Lego boards (8 x 8 studs). You were given a numbered board pre-printed with the correct colours. When you had stuck on the right bricks, your tile was hammered on to right place on a huge board. It was neat to watch the picture taking shape over the day and see it completed by the end of the day. 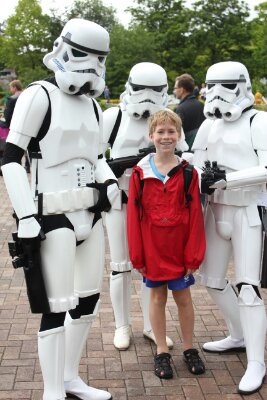 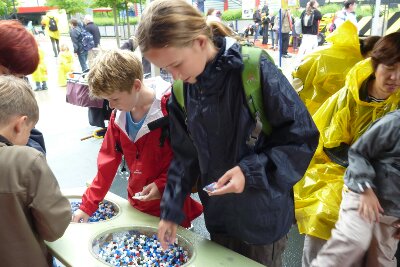 The rest of the afternoon was spent braving the rain and riding ourselves silly. We only got thoroughly soaked once, flying high on Ninjago in the pouring rain. After that we holed up in the Hero Factory ride as it was inside and warm, and gave us a chance to dry out. In spite of the rain, it was a fantastic day, and we got more rides because of the weather. Last stops of the day were a second visit to the Pick’n’Mix shop and the giant Lego City shop. The kids were keen to spend the last of their Euros and both bought a large Lego set. Anna bought a VW camper van and Matt got a space shuttle. The suitcases will need to be expanded and rearranged, they are both looking forward to making their models when they get home to NZ. 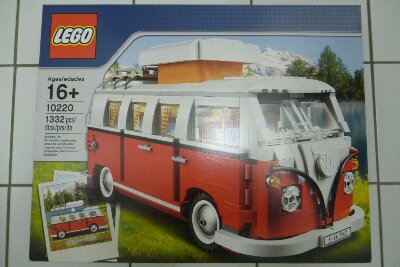 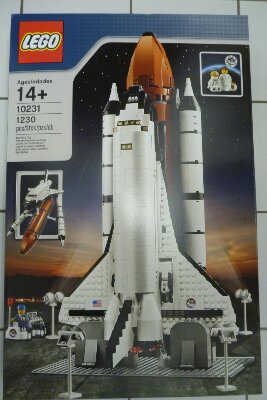 We left the park really satisfied that we had made the most of the day and there was no unfinished business. Dinner that night was in the Steak House for a change and the food was delicious. We were really impressed with the Legoland Feriendorf overall.

The Bright Lights of London