After a couple of days of sightseeing, we decided that Thursday was to be a day lazing around Lerici. It was our laziest start of the holiday with morning-boy Matt not waking until 9:45am! It is very quiet in this house with zero traffic noise (as there are no roads!). The only noises we hear are the stray cats meowing, sea gulls squawking, church bells and gunfire. La Spezia (a bit further around the bay) is the largest naval base in Italy and we regularly see frigates and other vessels in the bay. In the mornings there are huge booms that rattle the glass in the windows, we assume they are practising firing blank shells in the harbour. Fortunately it doesn’t start until well after 10am. 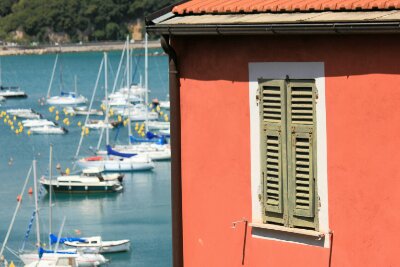 It was after midday before we left the house. The kids were keen to visit the main Lerici beach. It was much busier than previous days as there was some sort of surf lifeguard competition going on. The beach was free (relatively uncommon for Italy), but Anna was keen to hire sun loungers and an umbrella. We made enquiries, but it was a daily charge and it would have been about 40 NZD to get an umbrella to share and a sun lounger each. We figured that money was much better spend on our daily gelato fix and ended up on the sand just like we do at home! 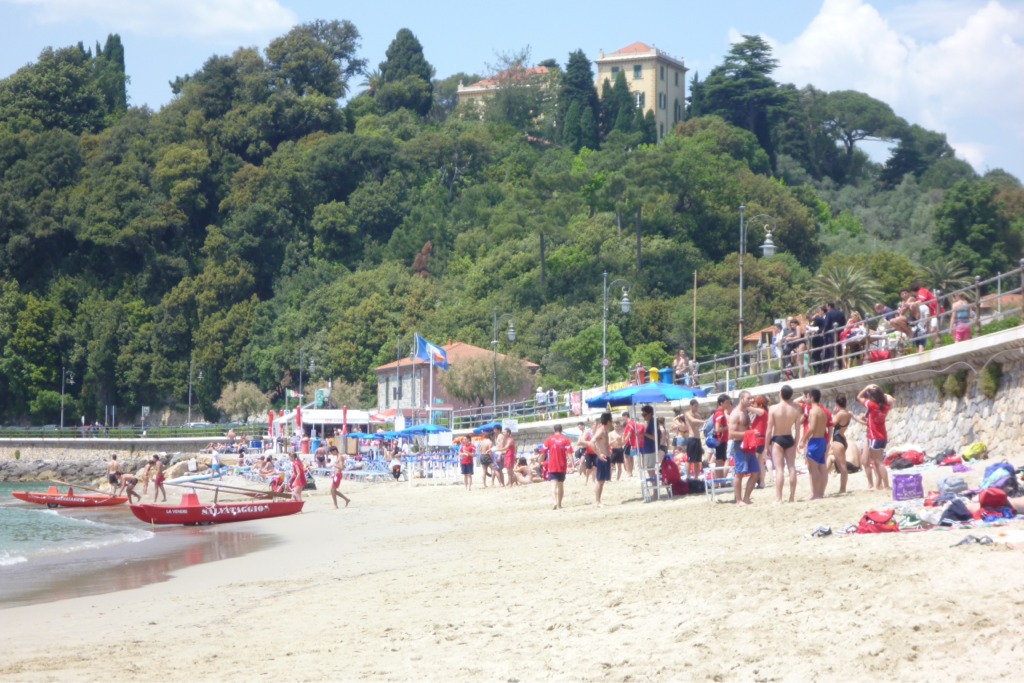 On the way back, we stopped to spend some of our sun lounger money on gelato. We returned to Andrea’s recommended gelateria, now a firm favourite. We can work most of the flavours out from the name or the picture, but yesterday I took my chances on a flavour called ace (pronounced “archer”). It was such a beautiful orange colour and tasted divine, especially with nero (a super dark “black” chocolate flavour). We still didn’t know what ace was, but Anna and I both ordered it with the nero.

After a short rest at the house (having a short rest involves a steep walk up every time!), we returned to the gorgeous bays through the tunnel. After the tunnel, there was a barrier across the track blocking the way. Our limited Italian didn’t extend to interpreting the sign but there were people on the beaches, so we ducked under the large gap at the bottom of the barrier.

The tide was a bit further out, so we had the smallest middle bay all to ourselves. The water is crystal clear and the sandy bottom makes it perfect for swimming. The water is a bit cold, but there is something about its colour that just makes you get in. The kids were totally happy on the beach – Matt building in the sand and Anna making an anchovy catcher out of a water bottle. 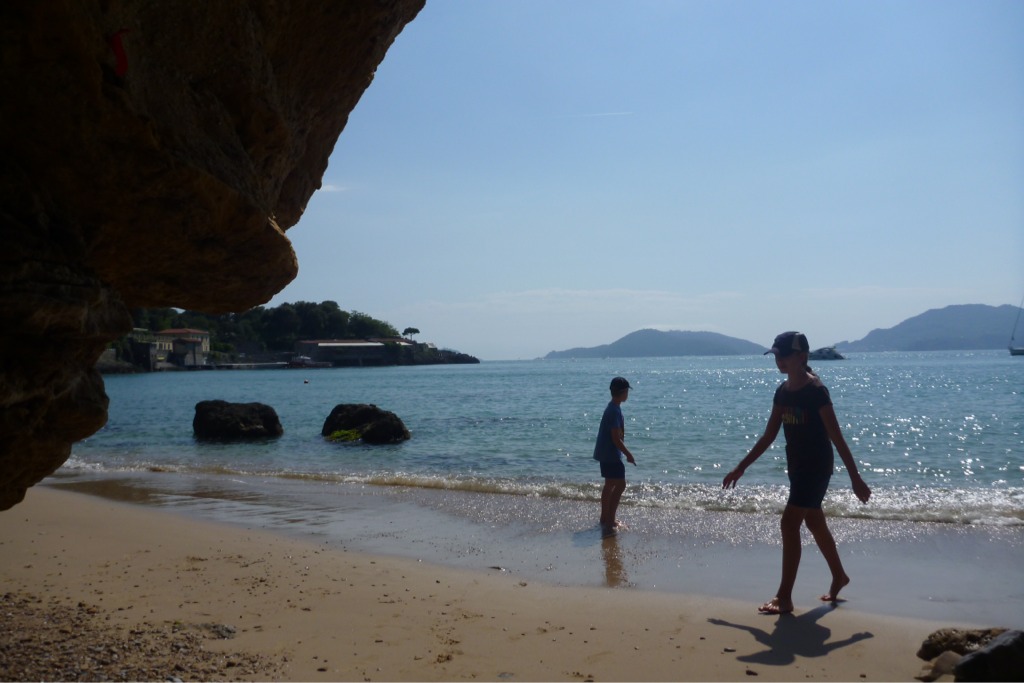 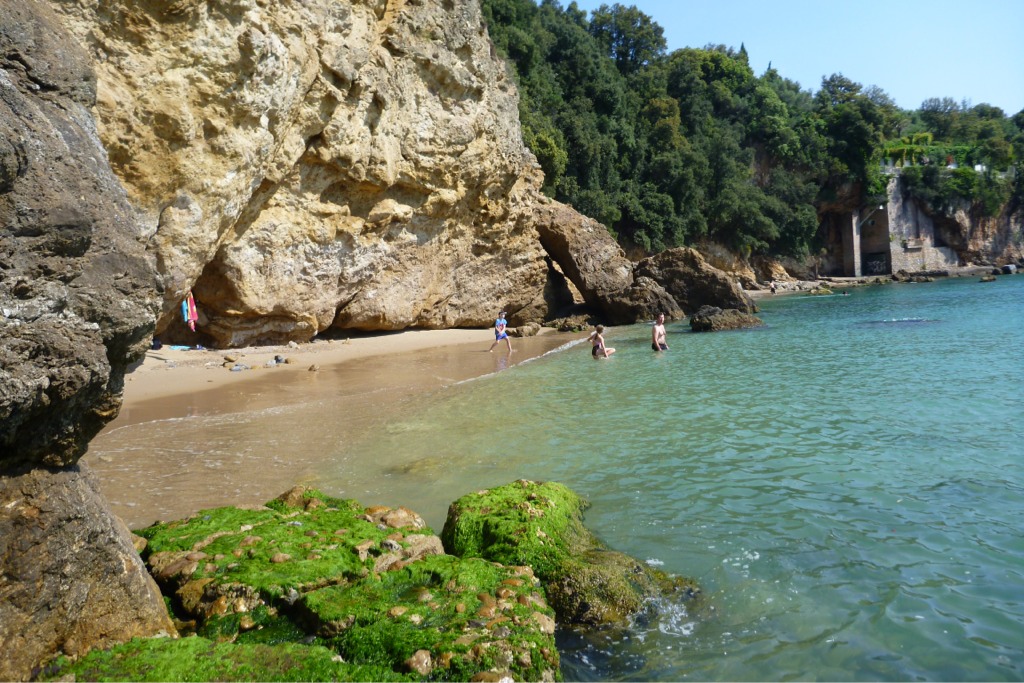 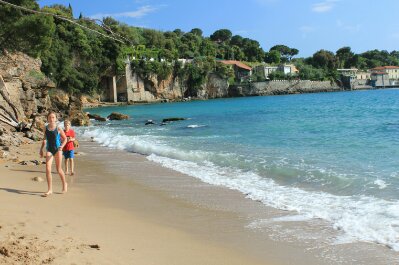 It was dinner at home that night, followed by a late evening walk. Some of the villas around here are pretty impressive, with even more impressive views. We ended our walk in Piazza Garibaldi to enjoy the sunset and soak up the atmosphere on a warm Italian evening. This is not a touristy place, almost everyone here is a local. For the first time we saw a group of kids in the square in the evening. They came over to us when we sat on a wall. They were working together to come up with the right English words. After a few attempts we finally understood – the piece of wall we were sitting on acted as their soccer goal and they wanted us to move along out of the way. They were very polite, something we have found with all the kids we have met in Europe.

We will be sad to leave Lerici in the morning. It has been a real favourite for us all, and a thoroughly authentic Italian experience.

Back to being tourists

To the Land of Mickey Mouse