Today the kids learnt that you need to be flexible when travelling. If Plan A doesn’t work, you move to Plan B, then Plan C, then Plan D…..actually we got to Plan F on Tuesday. But Plan F turned out to be fabulous. After complimenting the European weather forecasters in my last blog, they turned out to be wrong.

We woke to rain on Tuesday morning, not the promised sunshine. We had hoped to go to the Zugspitze summit (Plan A), but every weather forecast we checked said something different. We Set off on Plan B which was to bubble in some hot pools in Ehrwald at the base of the Zugspitze while we waited for the weather to clear. Only problem was we got there at 10am and the hot pools opened at 1pm!

We thought we would take a drive to Garmisch-Partenkirchen in Germany to see what we could find. We called in at the Tourist Office to grab some brochures and work through the various options. It’s quite a challenge to get information in English – this area definitely doesn’t see many English speaking tourists. It’s quite fun having to grapple with a foreign language more than in other places. Garmisch-Partenkirchen was host to the Winter Olympics in 1936 and 1940. The original ski jumping stadium from the Olympics is still used and has been extended to 4 ski jumps of various sizes. We took the kids out to see the stadium and there were three kids training on one of the jumps (on the artificial turf). It was great for the kids to see them jump, especially as the jumpers were about their age. 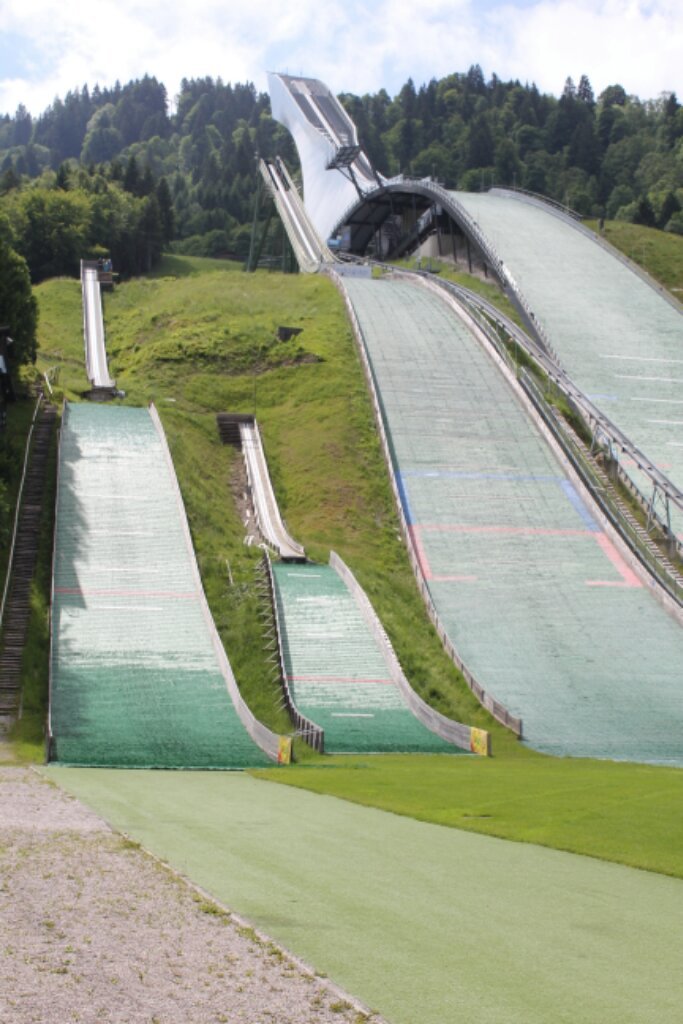 After the ski jump we checked out the centre of Garmisch and stocked up on groceries at a decent sized supermarket. The weather was hot and sunny, so we decided to go back to Ehrwald and check out the Zugspitze. It was beautiful there too, but the summit of the mountain was still buried in cloud. The webcams of the summit showed that it would have been a complete waste of money to ride to the top.

There are a number of other cable cars around that give access to hiking areas, but are not as high as the Zugspitze gondola. Plan F was to ride to the top of the Ehrwaldalmbahn gondola and go for an alpine hike. There was an alpine lake about 45 minutes hike from the top of the gondola station so we headed for there. Lake Igelsee was a tiny picture postcard alpine lake surrounded by green grass and patches of snow. It was the perfect spot for a very late picnic lunch. 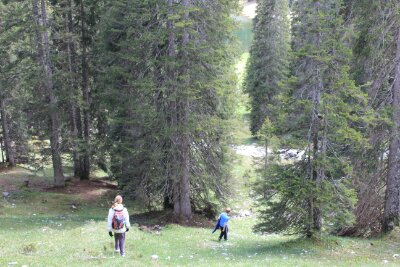 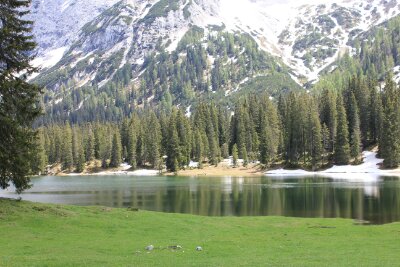 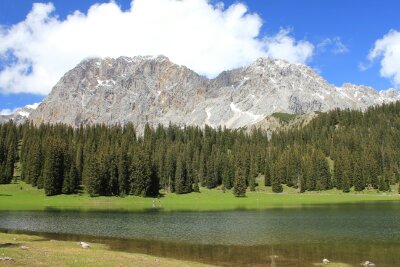 The kids had a great time playing in the snow and were very amused to see ducks from the lake waddling on the snow too. We enjoyed relaxing in the beautiful scenery and breathing the mountain air. It was warm and sunny but a cloud cap remained on the Zugspitze summit all afternoon, so we were glad we had changed our plan. 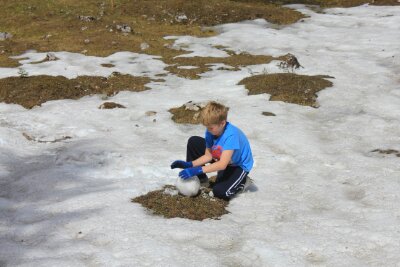 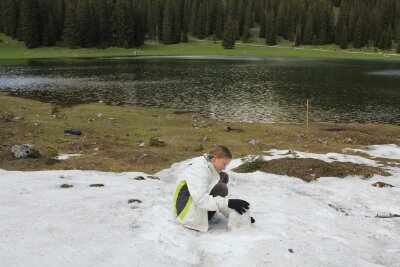 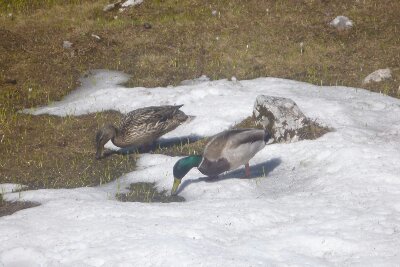 The kids were tired after the hike so we returned to Bichlbach for some R & R. Andy made the most of the lovely weather and wore himself out on a long mountain bike ride round another alpine lake. He treated his aching muscles to a soak in the hot pools at Reutte again. The day turned out quite differently than we had anticipated, but it was a great day anyway in our mountain paradise.

Checking Out the Mountain