The day to return to NZ came around all too fast. We never understand people who say they are ready to go home at the end of a trip. Maybe we are the weird ones, but we never feel ready. After three weeks in Japan we are really getting into the culture and the swing of how things work. We are used to the crowds, the rain and not understanding much at all, and none of it bothers us. There is so much more we would have liked to explore. But today arrived and we packed our bags for the long journey home.

Andy and I couldn’t resist one last wander in the beautiful Southern Higashiyama district. We were up with the crows and Andy went out before the crowds on one last geocaching mission. Mostly we had been far too busy to geocache (and Japanese crowds give a whole  new meaning to the geocaching term “muggle”) but we were determined to leave with at least one Japanese cache to our name. After a couple of failed attempts on other days, Andy was rewarded this morning. Once he returned, I went out for one last walk in the local streets and a visit to my favourite shop on Sannen Zaka. By the time I went out, the place was crawling with tour groups (especially school groups) but no umbrellas required today which made the streets much easier to negotiate.

With our life packed back into four suitcases (miraculously we still fitted without even extending them!), we wheeled our cases down the cobbled streets to the local taxi stand, accompanied by the lovely Acco who manages the property we stayed at. She has been so welcoming and her house has been a fantastic place to stay in Kyoto. We managed to squeeze into one taxi. Taxis in Japan are Toyota Corollas, and usually the old square type – today we were lucky to get a modern lift back version with more boot space, although we still had one suitcase on our lap.

It was mid-morning when we left Kyoto on the last Shinkansen of our trip. Our rail passes have been really well used and saved us a bundle. It was a much nicer day than the last few and we were treated to some closer views of Mt Fuji from the train. Fuji is so often shrouded in cloud, I can’t believe we have seen it three times on this trip. 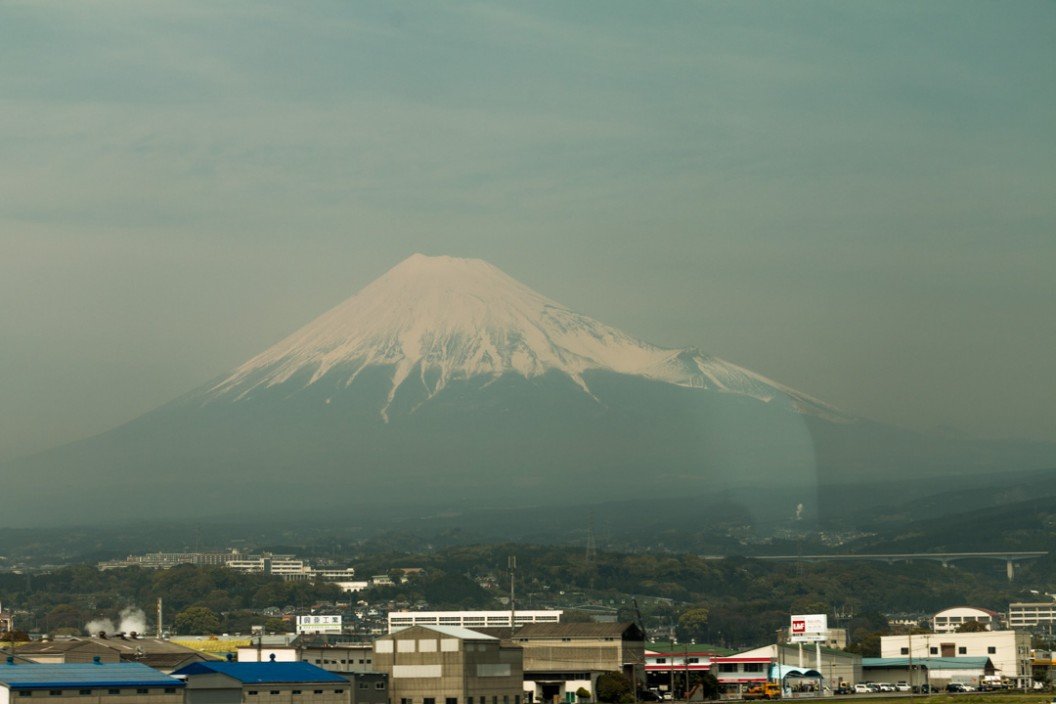 We had timed our trains so we could snatch a bit more time in Tokyo. Anna was really keen to visit the Tokyo Character Street and we’d run out of time on our Tokyo stay. It’s right by Tokyo station so today was our chance. Things can be right by a station but still be a challenge to find. The Japanese train stations are enormous with multiple exits and Tokyo is one of the biggest. We had read it was by the Yaesu exit, but even Yaesu offered us the option of North, South or Central. We took the middle ground and found a base camp for the bags outside Yaesu Central. The pocket WIFI that had become our best friend was packed up for return, but we got enough patchy city WIFI to figure out it was in the mall underneath us. The kids and I headed off while Andy stayed on bag-watch. After wandering the length of the huge shopping mall, we eventually tracked down the Character Street almost directly under base camp. If we had opted for the Yaesu North exit we couldn’t have missed it. 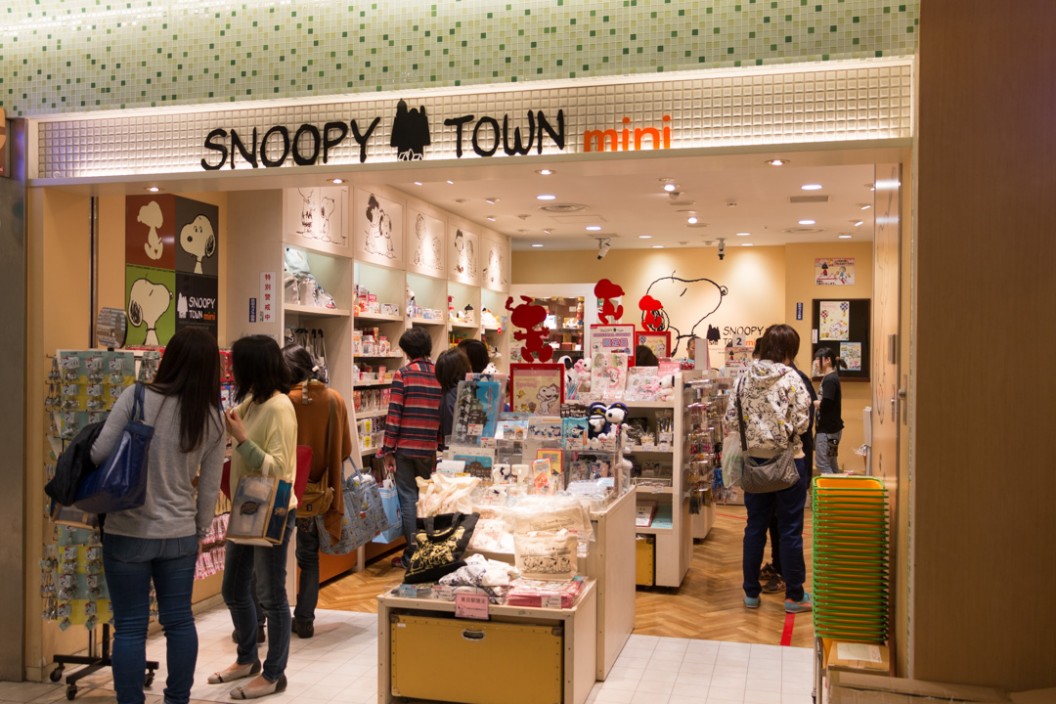 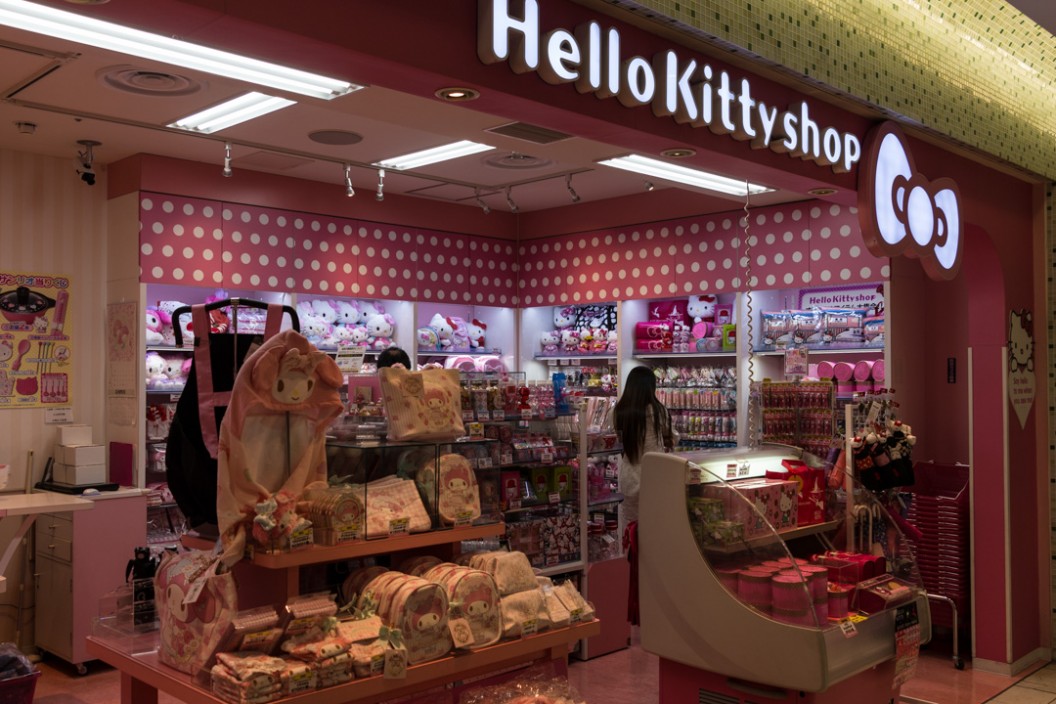 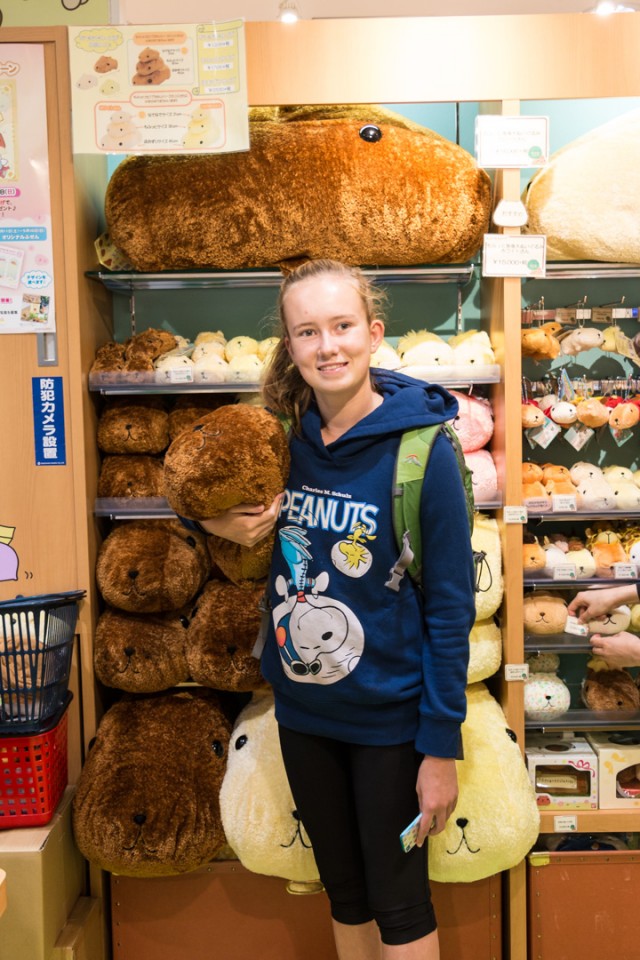 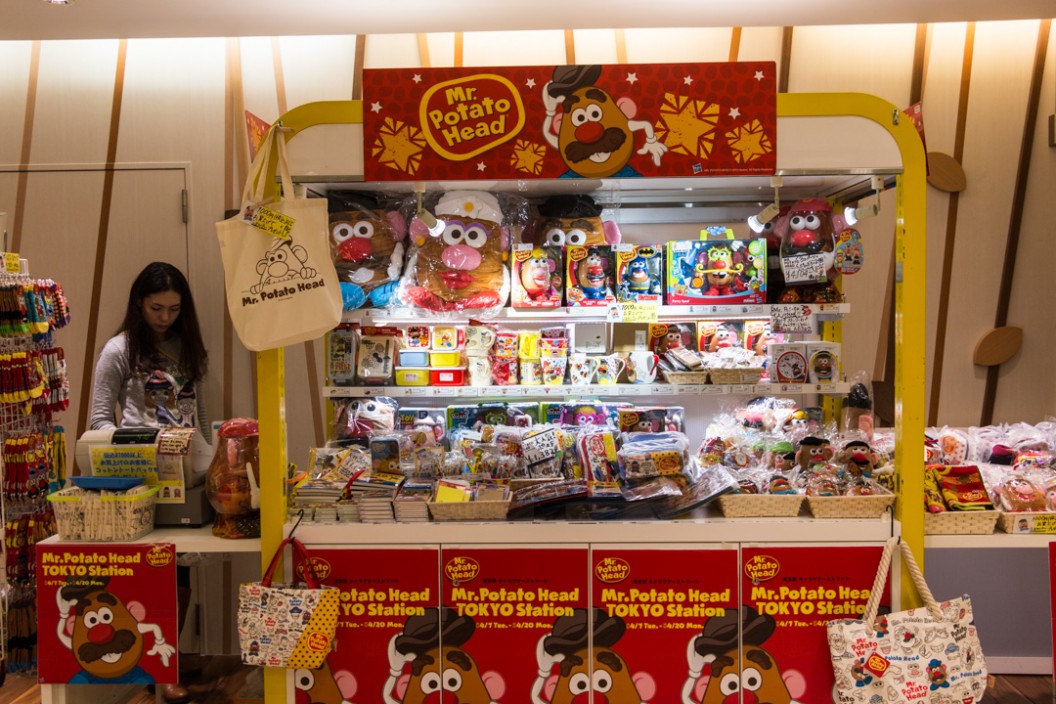 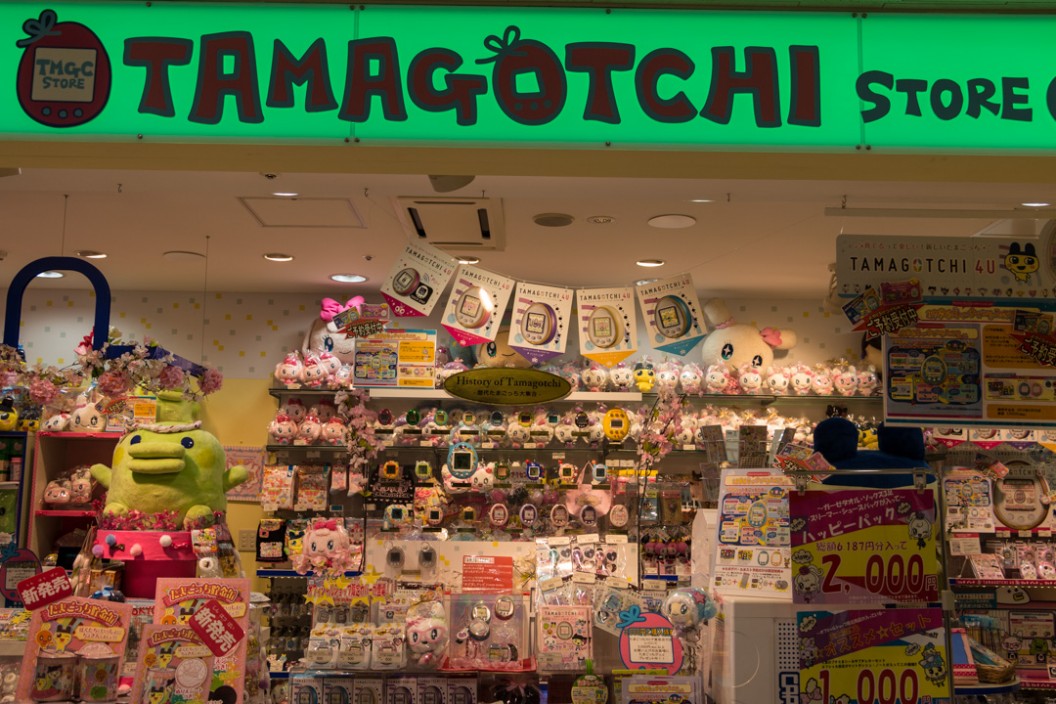 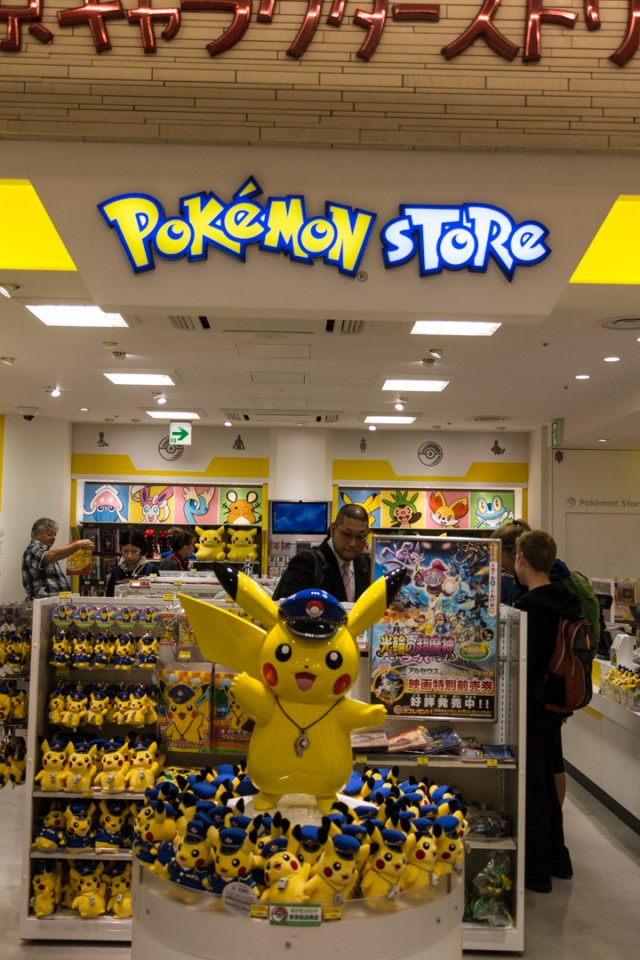 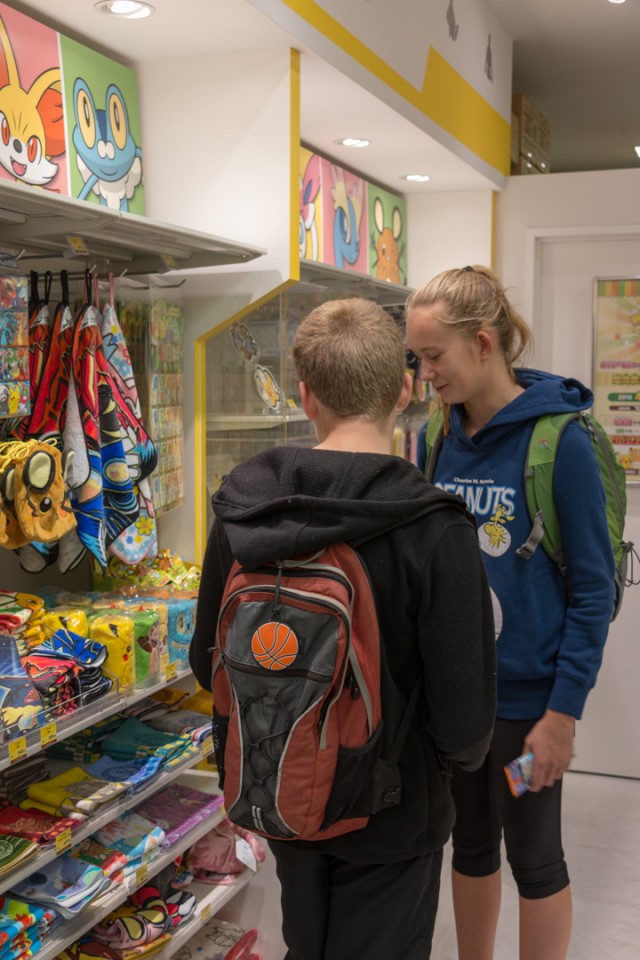 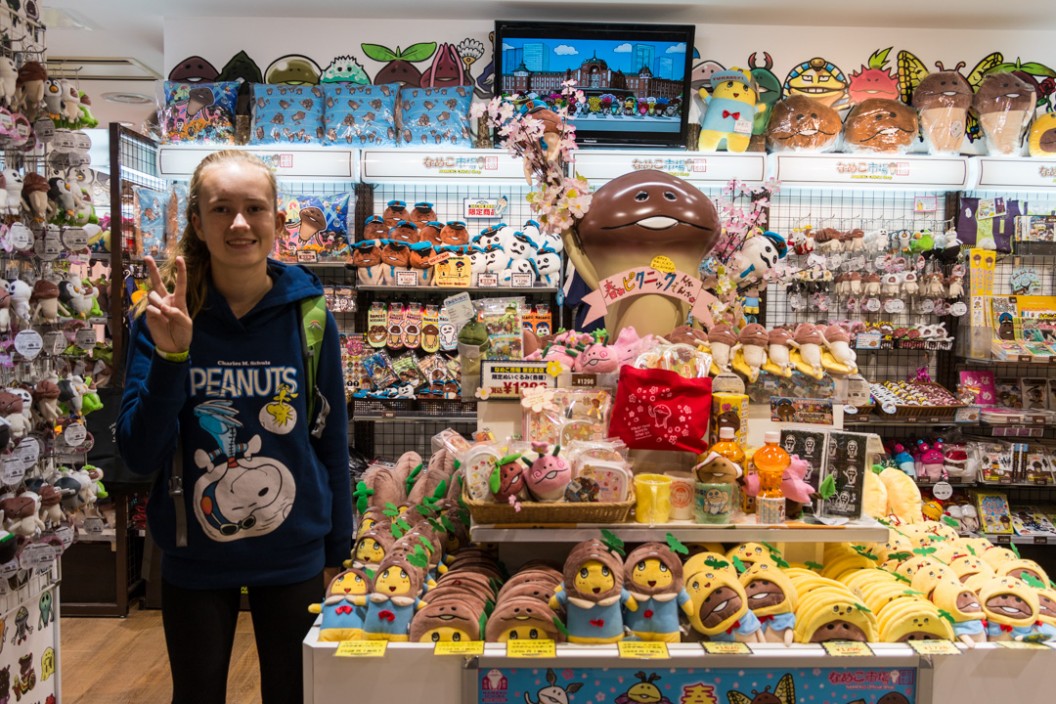 The Japanese have an obsession for all things cute and the Character Street is about 20 stores of concentrated cuteness. There are stores dedicated to Western characters like Snoopy, Miffy and Mr Potato, along with more Japanese themes like Pokemon – and of course the ever popular Hello Kitty. We had fun poking in all the stores, there was lots of laughter and we came away with a few more things to be squeezed in our bags. Andy got his leg stretch as well while we soaked up some sun, then we caught the Narita Express to the airport.

After so many train trips we were feeling like old hands, but then fell into a classic trap for young players. We had reservations in Car 5 so we headed to the sign for Car 5 and stood politely in the queue, as you do in Japan. The train duly arrived, but went well past where we were standing. We did the natural thing and raced down the platform to where the train was. The car numbers were all wrong, but we figured we were better to just get on and walk down to Car 5 through the corridor. We’d just hopped on when we heard an announcement – only half the train had arrived and the other half would be along shortly. So off we got, more frantic wheeling back to the Car 5 sign and up rolls the other half of the train. Matt made one last dash down the platform as he was desperate to see how they joined the trains. Happy ending, but a good reminder that we are not experts at all!

Narita Airport has one of the best airport malls I have seen, so with spare time and spare yen we headed back to the same mall we visited at the beginning of the trip. We all stuffed a few more purchases into our back packs then grabbed some early dinner at one of the restaurants – an insurance policy against airline food. We made the most of Andy’s Star Alliance gold status, bypassing the long queues. It was that same feeling of satisfaction mingled with slight guilt that we got on a Disneysea fastpass ticket.

It took 10.5 hours to wing 8,836 km back to Auckland. We were split across the aisle so we let the kids have the two seats by the window. They are seasoned flyers now and looked after themselves. The Air NZ steward gave them lots of attention, even joining in with their origami creations. The meals were predictable but edible and the kids gave the tick to the Japanese options again. Andy was the only one who opted for the Western dinner on offer – a curry! We all managed to snatch enough sleep to get through the next day, but really appreciated a horizontal bed the next night. Auckland airport felt deserted – we were the only flight landing at that time and we were through so quickly that the shuttle bus driver hadn’t even arrived. I’ll write one final blog once we’ve caught up on ourselves and include the Creahan travel awards which have become a tradition after each of our overseas adventures.

Skiing and a soak in the onsen