Monday was the longest drive of our trip – 538km from Provence to Lerici in Italy, with few extra kms added for a detour into Monaco. We had good intentions of leaving early but it was hard to break our late rising pattern, so it was after 10am when we left.

The weather was still pretty dreary, but thankfully not the heavy rain of yesterday. The car has now been named Pierre the Peugeot. Nav-Madame directed Pierre to the nearby Autoroute for his first experience on a motorway. Andy found the motorway driving easier than around the town. We were passing Monaco 3 days before the start of the Grand Prix, so we thought it would be fun to go and check it out. The usually stunning Cote d’Azur was more like Cote de Gris in the dreary weather so we just had to imagine how blue the water normally looked. The drive into Monaco was not too bad and we found our way to a car park with Pierre driving on part of the race track en route. A lot of the stands and barriers are already up so you can better imagine the craziness of the race. 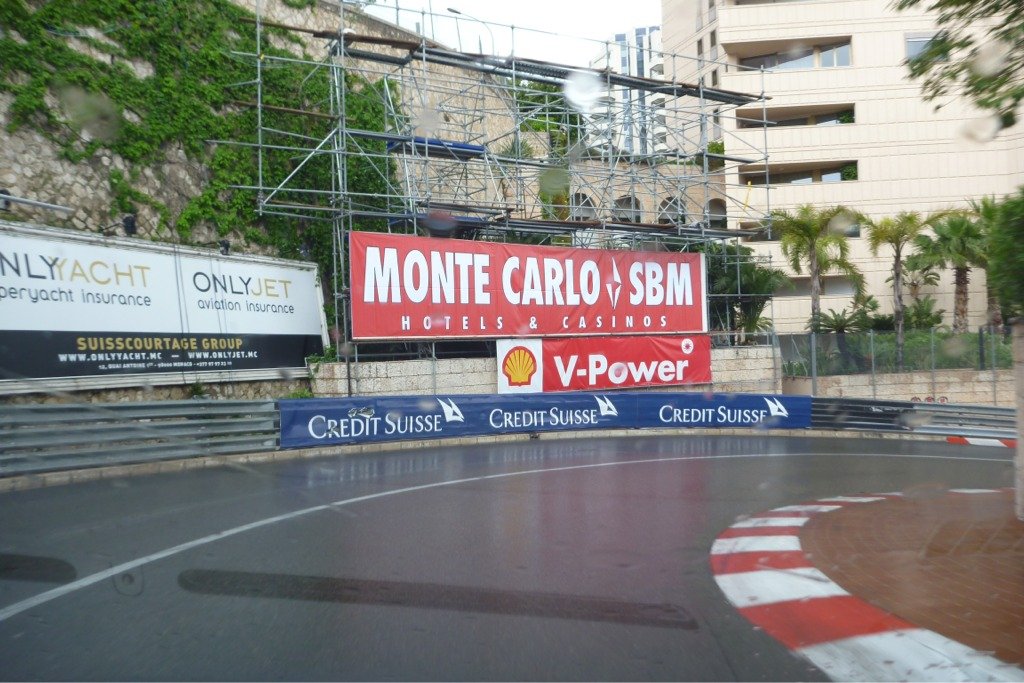 We had a quick bite to eat in the car park building (I bet the rich and famous don’t do that!) then headed off on another loo-finding mission. It was just as hard as the mission in Paris, but when we finally tracked one down there was no queue and no self cleaning routine -phew! We checked out the Casino and the nearby park in search of a cache. One of our missions was to find at least one cache in Monaco so we could add it to our list of caching countries. It turned out to be harder with all the works going on for the Grand Prix and limited access to places. We walked through the tunnel that the Grand Prix track goes through. At times the noise was deafening as Ferraris and other flash cars raced by. The cars parked around Monaco are rather impressive, although the funniest thing we saw was a smart car with a Ferrari badge hot glued on to the front!

We finally succeeded with cache #3 on the way back to the car. Leaving Monaco was not quite as easy as coming in. It was a windy route back up the hill and parked cars in narrow streets added to the challenge. Andy did a superb job of negotiating Pierre through the streets. Andy’s edit – to say the streets of Monaco were narrow is a major understatement! Narrow, steep streets with cars and bikes coming from all directions, still lots of fun though – Our only incident was to clip the inside wing mirror on the pizza delivery box on the back of a Pizza delivery bike – no harm done to Pierre, and too busy to stop and check the state of the Pizza’s 🙂 . The sound of a V12 Ferrari winding up, in a tunnel, to overtake our Peugeot diesel is just a little bit cool.
We hit a traffic jam on the way up and decided it was better to turn around and take another route out. Once we were back on the autoroute we made fast progress. The road we were on was an incredible feat of engineering. Where there was a hill, there was a tunnel through it. Where there was a valley, there was a viaduct over it. Our kids love tunnels and we had mentioned there could be a few. They were totally blown away by the sheer number of them – a tally was kept and by the time we arrived in Lerici we had passed through 182 tunnels ranging in length from 40m to 1997m, and a similar number of viaducts. By the end tunnels were declared to be rather boring! 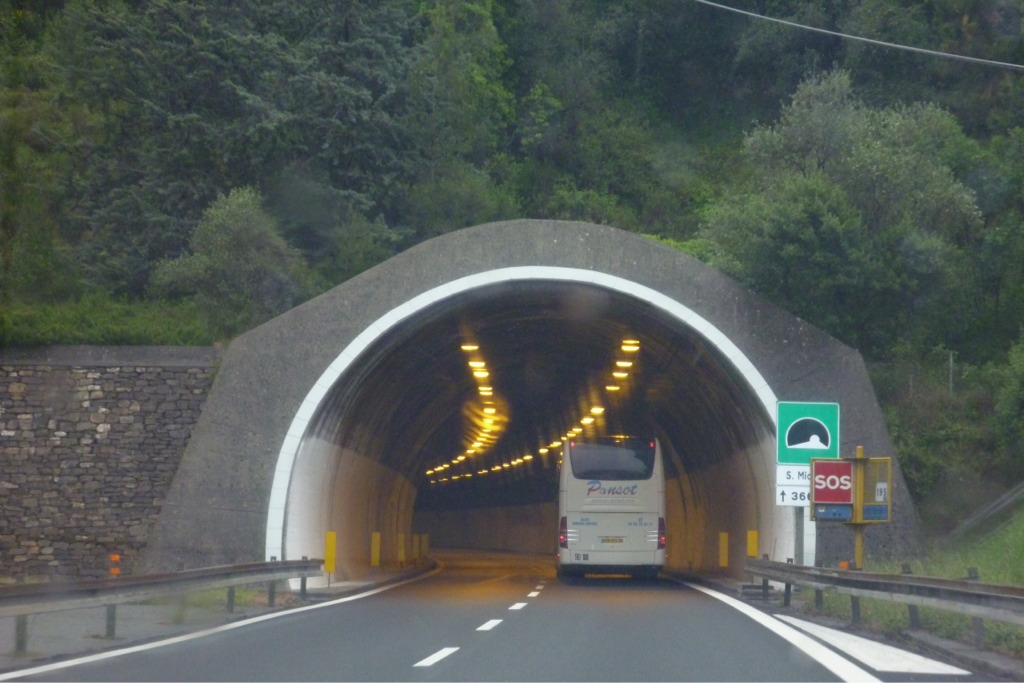 We had rented a small house in Lerici via the Holiday Rentals website as I was keen to find the kids a really authentic Italian experience. My instructions were to call Andrea (the owner) just before we got to Lerici. The phone call went reasonably well – she was expecting us although I couldn’t understand much of what she said as she spoke a million miles an hour.

When we arrived at Piazza Garibaldi, we had to quickly empty all our luggage out of the car and wait with Andrea at the bus shelter. In the summer the streets of Lerici are closed to non-residents and apparently the Police had decided to close them early this year. Andy followed Enrico (Andrea’s husband) to the public carpark and then Enrico gave him a ride back to meet us. While they were away, Andrea continued to talk at a million miles an hour about her beloved town. Once we were re-united, we started the walk to our house with all our luggage. The castle of Lerici (built in 1241) is up on the hill, and our house is very nearby. It was built the same year as the castle to house the soldiers from the castle. The footpaths up to the house were like ramps made of bricks with one step every few metres. It was hard work, but the amazing village around us made it seem like fun. 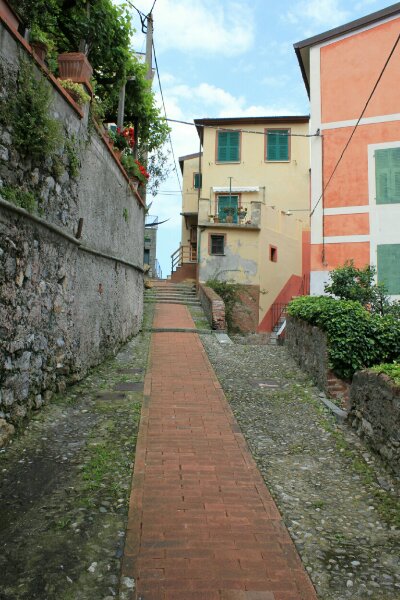 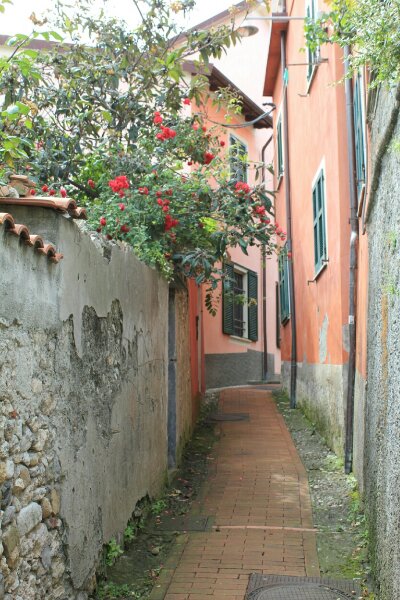 The house is beautiful and the view over the next bay is breathtaking. It used to be Andrea and Enrico’s home and is still beautifully furnished. Enrico is a painter and the walls are covered in his beautiful art work of the local area. Andrea and Enrico gave us a lengthy tour of the house, proudly showing us everything. Andrea continued to talk a million miles an hour, alternating between rapid broken English to us and even more rapid Italian to Enrico. It was quite hilarious, but they were incredibly kind and welcoming. When the tour finally finished they escorted us back down to the main town and to their recommended Pizzeria so that we could get a very late dinner. We finished our long day eating delicious Pizza in Piazza Garibaldi and washed it down with an equally delicious gelato – perfect!

Images from the UK and Ireland

The Bright Lights of London