We have been very lucky with the weather so far. The last place on our itinerary that we expected heavy rain was Provence, but that was exactly what we got today (Sunday)! The locals were delighted, they haven’t had any decent rain since November last year. We weren’t too worried – it made us slow down and it didn’t last all day.

We had thought we would visit the Chateau at Les Baux today, but the weather forecast was not good and the chateau is more of a ruin so mostly outside. We left it up to the kids – in the end they decided they had seen plenty of castles and opted to explore the crazy rocks above Les Baux while it was still dry. It turned out to be a good call as just after we finished at the rocks, the heavens opened. 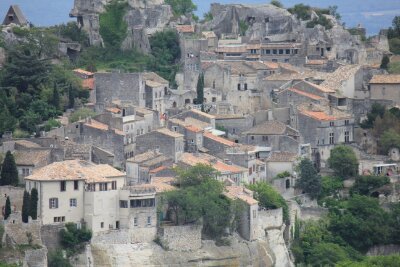 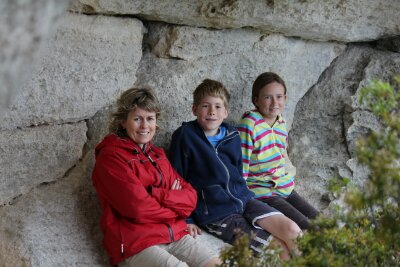 Wet weather options are pretty limited around here, but there was one inside attraction nearby that we were planning to visit anyway. Carrieres de Lumieres near Les Baux is a sound and light show set inside huge chambers quarried into the rocks. It is very hard to explain and impossible to photograph. Images are projected on to the rock walls and floor and accompanied by classical music. It’s not just one chamber but a maze of chambers and the images are on all the surfaces, so it is a very impressive experience. The main show uses images of Gaughin and Van Gogh paintings, with another show called “Les Metamorphoses” based on images from nature.

The shows ran continuously and you could stay as long as you liked. There was also an area of chambers that were not part of the show so we were able to take a photo there. We all enjoyed the show, it was just such a different experience for all of us and a good dose of culture! Van Gogh lived in Arles and St Remy and a large number of his paintings were from the area. 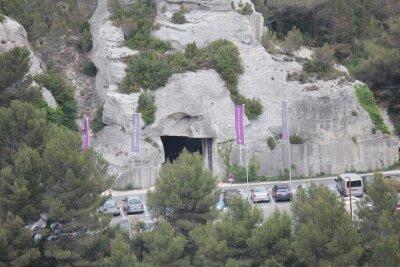 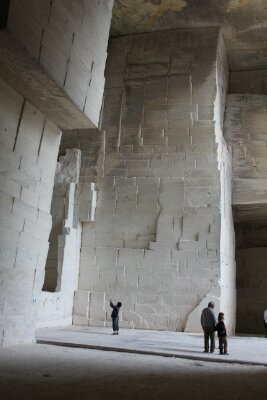 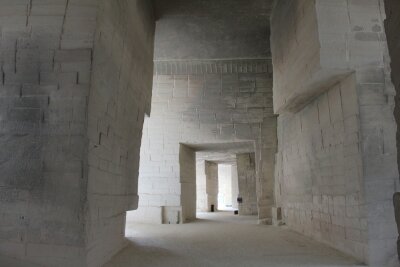 It was a very wet afternoon. After a relax back at the apartment, we went in search of a Patisserie in St Remy. We walked in and out of tiny streets all around St Remy in the rain. We didn’t have much luck with the Patisserie but eventually we found a cafe that pleased everyone and was happy to accommodate four dripping wet kiwis. Crepes for the big people and gelato for the kids were the highlight of the afternoon.

We had promised to take the kids to a real French restaurant, but were wishing that we had done it on a drier night. Luckily the rain stopped before we headed out for dinner and we were able to wander the streets looking for a suitable menu. We arrived at our chosen restaurant at 6:50 pm, to be told that they didn’t start serving food until 7pm. That was fine by us as it took us longer than 10 minutes to decipher the menu. The kids both ordered the beef patty and fries. Beef patty was the Provence equivalent of nuggets, but it was high quality minced steak cooked to their liking and the kids said it was delicious. Andy had steak with pepper sauce and I had roast leg of lamb – all completely delicious.

After dinner we needed some exercise to burn off the dinner. We checked out some of the 20 Van Gogh information boards around the town. There were quite a few around the Mausole de St Paul, the mental hospital where Van Gogh stayed before he killed himself. It is still a working hospital and it did feel slightly odd walking around it. We finished off at the Starry night board as that was the kids favourite painting.

To the heart of John Wayne country