The weather forecasters in mainland Europe seem to be more accurate than those in NZ and the UK – it must be easier to forecast weather for continents than islands. We were promised a grotty day for Monday, and a grotty day was delivered!

It was a great excuse for a lazy morning. We sent Anna off to the Bäckerei to do the morning bread run. She returned with nice fresh bread in the shape of a caterpillar. It was lovely to spend some time catching up with family back in NZ until the WIFI decided to spit the dummy. Anna and I then wandered down to the Nah und Frisch supermarket in search of food supplies. It was rather tiny, but we managed to get enough for lunch.

One of the things on our must-do list for this area was a visit to a heated pool complex. There were a few to choose from, including one in the hotel we stayed in back in the 1990s. We were very tempted to return to that one for old times sake, but decided on the Alpentherme Ehrenberg as it had a water slide for the kids. It only opened 6 months ago, so everything was state of the art.

We were given wrist bands with tags which allowed us entry and opened and closed the security lockers. They were also used for charging food purchases, which were paid on departure. We forgot our locker number so I was trying my tag against lots of lockers. One of the staff came over but spoke no English. After a bit of pointing at numbers and shrugging my shoulders, she took me by the hand and led me to a machine on the wall. When I held up my wrist tag to the machine, it displayed my locker number. How cool was that!

There were inside pools and warmer brine pools outside, all with lovely mountain views. You rode the water slide on inflatable tubes, either singles or doubles. The doubles went faster but the singles spun more. The slide had multi-coloured lights in it. We loved standing in the slide queue looking out at the snowy mountains. In a typical Austrian way, the pools had lots of jets, massage beds, shower spouts and there was a fast flowing river (a bit fast to be called a lazy river!). It reminded us very much of the pool at the hotel from our last stay, so it was still like a trip down memory lane. 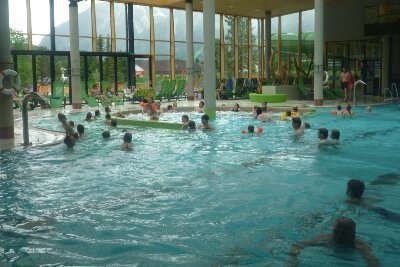 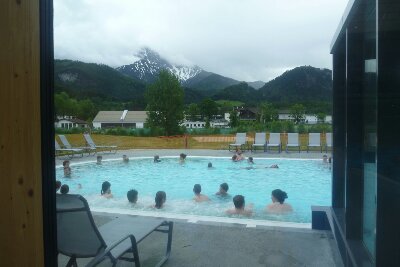 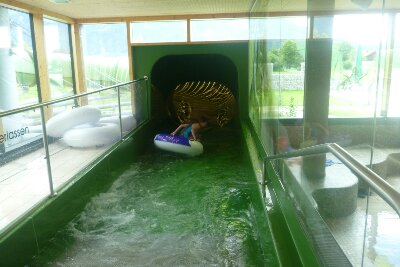 In the evening the weather cleared enough to go for a walk round our village and find a geocache. The forecast looks much better for tomorrow so we are hoping to go to the summit of the Zugspitze.