None of our car journeys have been particularly long (especially by American standards), but today’s drive was our shortest yet at around 2.5 hours. Anna and I decided to check out the Moab shops after breakfast since there was no great rush today. Moab is a very touristy town with lots of quaint shops. The only problem was that almost all of them were closed for the winter season.  It must be a hiving little town in the height of the season, but this morning it was pretty dead. In three blocks in the centre of town, we found three shops that were actually trading. We did find one more with an open door, but when we went in they explained that they weren’t really open, just getting ready for the next season! It was quite weird to see all these shops fully stocked but closed for months. Needless to say, it didn’t turn out to be an expensive morning….

We left Moab around 11am in brilliant sunshine. We made a quick stop at Blue Mountain Foods in Monticello, about 50 miles south of Moab. Monticello appeared to have nothing going for it, but I had read that the local supermarket sold mouth-watering donuts. The reviews were not wrong, they were delicious and a bargain at 49c each. The joys of travel research on the internet!

From Monticello we drove straight to Monument Valley. On car journey days, we eat on the road to save time. Usually I eat with the kids and then we swap drivers so Andy can eat. We could see Monument Valley in the distance about 100 miles before we got there. As we got nearer we found the classic road that approaches Monument Valley. We half expected to see Forrest Gump running along the road, but then we remembered that he did stop running.

Our home for the next two nights is the View Hotel. This very famous hotel sits on the edge of the valley, looking over the most famous rock formations. Every room has a million dollar view of the mittens below. We would not be staying here if we were travelling during peak season, but off-season the price was very reasonable.

We weren’t able to check into our hotel until 4pm, so filled in the time by driving the 17 mile scenic loop around the valley. This is the only drive you can do without a guide. All the roads we have travelled so far have been well maintained, this one was a little different. It was 17 miles of red sand and rock, and very rough in places. We weren’t sure whether our rental contract allowed us to drive on dirt roads, but we came back with the car intact (if we get no rain, it may need a bit of a wash to remove the telltale red dirt!). The drive was pretty bumpy, but incredibly scenic. As the sun got lower, everything in the valley got redder and redder. It was pretty special to be driving through a place that is so instantly recognisable. 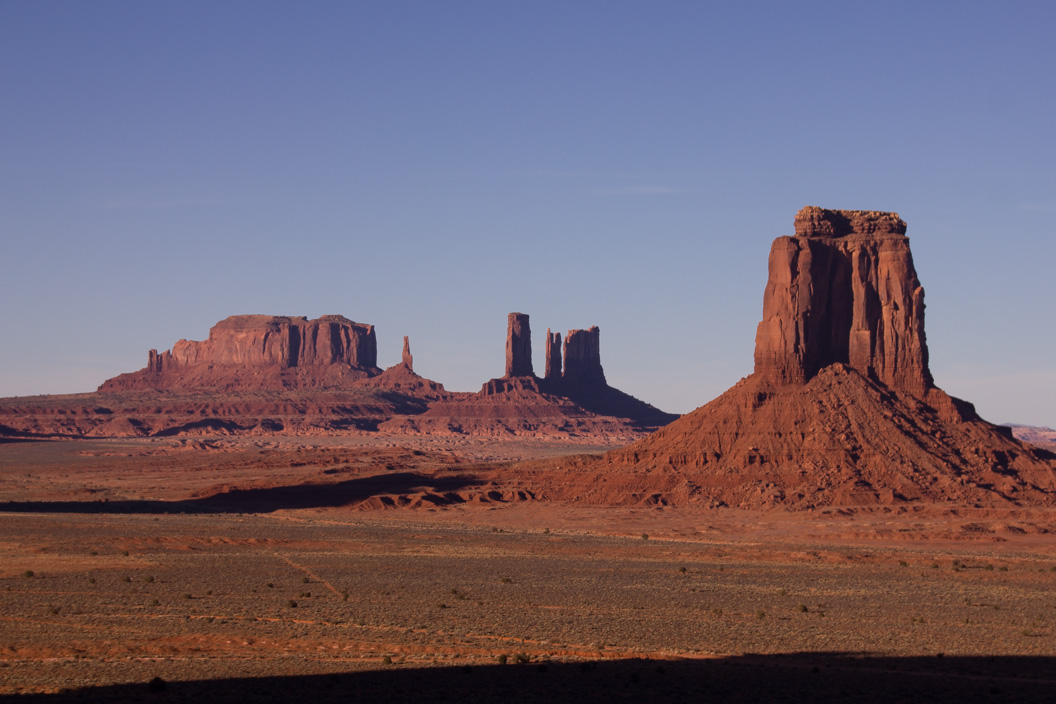 After checking into the hotel, we enjoyed watching the changing light over the mittens as the sun went down. Then it was time to sample some Navajo Indian food in the restaurant. The portions were huge (really?!) and the tortilla bread was many time thicker and fluffier than what we are used to. As usual we were unable to finish the food on our plates.

This hotel only has WIFI in the lobby, which is set up like a huge lounge with lots of couches and an open fire. We’re all down there enjoying the atmosphere with people from all over the world. Tonight is the first time we only have two queen beds, as this hotel does not allow rollaways. The plan is to sleep boys and girls, rather than make the kids share. I still have bad memories of having to share a bed in LA with my sister when I was six! Tomorrow we are booked to horse ride the valley and pretend we are in a Western film.

A day in Provence